In his early twenties, Denzel worked as a garbage man and a postman simultaneously to make ends meet. He had to wake up early, have a set routine to get out the door and make it happen each and every day. Washington told the Hollywood Reporter, “You have eight hours worth of work, but you can do it in three. Then you come back home. Post office, you have three hours, and you can make it Class A. I did both. I liked being the garbage man better”.

Back then, it was simple: get up. Go to work. Come back home. Repeat. Even Denzel’s breakfast choices are simple.

“I like a good omelet. When I feel like being a slob, I love french toast,” says Washington. “But I like a great omelet. And I like a simple breakfast, a little diner, with bacon and eggs and hash browns, some real good greasy funky hash browns, a little OJ, a cup of coffee, I’m good.”

Over the years, whenever Denzel is asked about accomplishing his goals and being a success, he usually alludes to what we can do each night and every morning to make it happen.

“You can do it. But take responsibility. Put your slippers way under your bed so when you get up in the morning, you have to get on your knees to find them. And while you’re down there, start your day with prayer. Ask for wisdom. Ask for understanding. I’m not telling you what religion to be, but work on your spirit. You know, mind, body, and spirit. Imagine—work the brain muscle. Keep the body in tune—it’s your temple. All things in moderation. Continue to search. That’s the best part of life for me—continue to try to be the best man.”

“True desire in your heart, for anything good, is God’s proof to you, sent beforehand, that it’s yours already.” 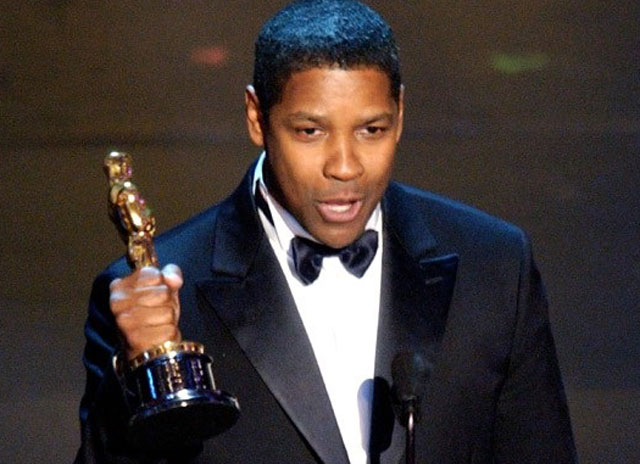 Denzel with his Academy Award

Denzel does 10 rigorous rounds of boxing five days per week. This boxing regime is a good combination of aerobic exercise and strength training. This exercise helps in burning fat and building muscles, simultaneously.

Boxing is a very rigorous and serious workout and it is not possible to follow such a workout routine unless you are fully determined and compassionate about your physical fitness. Boxing works almost every muscle in your body. On an average, a person can lose around 1000 calories per day with boxing. As quoted by blackdoctor.org, there is a reason why Denzel prefers boxing over any other method of losing weight as it is an interval training. You go really hard for three minutes and then rest for one minute so that your heart rate comes to normal, then you repeat this again and again several times. This type of workout is helpful in burning 20% more fat than any other type of training.

Some of the boxing workouts adopted by Denzel include UFC Power Play, LAPD Precision Punch and Middleweight Lightning Hands. Other exercises that Denzel uses for a better body and fitness level include some handheld weights used for toning his upper body along with some functional training and cardio training as well.

It is not only the rigorous workout that has kept the astonishing body shape of Washington. He also sticks to a very strict diet plan, which helps him in maintaining his body form. He admits that he has made a commitment with himself that he will completely avoid anything that hampers his ability to keep his body and mind together. His diet is based on the strict principles of portion control, which says that he has no eating restrictions as long as he is eating in controlled serving sizes.

His diet mainly includes high protein low carb foods that help him in maintaining a lean muscle mass and low-fat level in his body. High protein foods such as chicken, turkey, and fish take a big portion in his diet. For his clean carbohydrate needs, he prefers brown rice and whole grains.