Evander Holyfield (born October 19, 1962) is an American former professional boxer who competed between 1984 and 2011. The only thing I ever knew about my father was that he never let anybody outwork him. Even as a kid I loved working hard, chasing people down, being dirty, getting ahead. Loved it. Boxing training was one of the things that I loved. I didn’t like the boxing part, but I loved the training. People would always ask, ‘when you gonna stop?’ But I have always liked being able to do what nobody else could do.

After unifying the WBA, WBC, and IBF titles to become the undisputed cruiserweight champion, Holyfield moved up to heavyweight to sought out a title fight with Tyson. For his preparations, Holyfield enlisted Tim Hallmark, a fitness specialist based in Houston, to put on the muscle mass and strength required for the heavier division.

After the weight training session, Holyfield did a boxing session at midday, followed by a conditioning session in the late afternoon three times a week. For his conditioning workouts, Holyfield focused on explosive movements — “Bounding exercises. Jumping exercises against resistance. If I can get his legs to where they contract hard and fast, then the power movements will carry over into his punches,” explained Hallmark.

Holyfield also did a lot of training sessions, a good way to achieve high intensity, without stressing the joints. “In the water, Evander wears a wet vest, which keeps his body balance,” said Hallmark. “He does leg and arm exercises for certain intervals. With all this he doesn’t run as much as he did when he was a cruiserweight. Maybe twice a week. And it’s more interval training at 100, 220, 440 yards.”

For Holyfield, the best part about moving from cruiserweight to heavyweight was the new diet. He was now eating four to five times a day, compared to his cruiserweight stage when he was only eating twice a day. He described a typical daily meal plan to The New York Times:

I have breakfast before the morning workout. Four eggs, grits, toast, orange juice and milk. After the workout, another breakfast, pretty much the same thing. After the boxing workout, I have lunch. Green beans, macaroni and cheese, chopped steak, corn bread and tossed salad, cold tea and/ or water. After the evening workout it’s usually fish, black-eyed peas, string beans, cabbage, corn bread, cold tea and/or water. Back in the apartment, while watching films on the v.c.r., I’ll have peanut butter and grape jelly on wheat bread, with milk.

Although he retired in 2011, Holyfield has been planning to come out of retirement earlier this year to take on Kevin McBride, who beat Mike Tyson.

That fight fell through, but Holyfield has kept himself in good shape awaiting his next chance.

Through his diet and training – which includes with his sons, Evan and Evander Holyfield Jr (he has another son, Elijah Holyfield, who plays in the NFL) – Holyfield remains in magnificent condition. 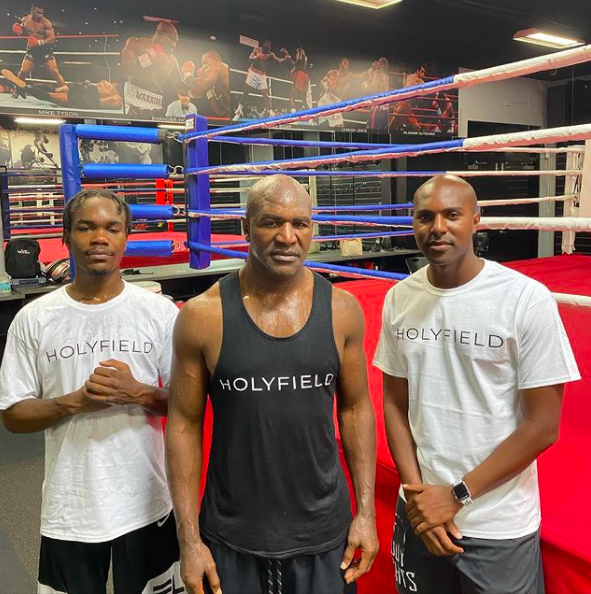 Throughout his career, he has enjoyed a meat-heavy diet. Protein was the name of the game for the former Olympian and while training to move up from cruiserweight to heavyweight, he had five meals a day packed full of meat.

Four eggs in the morning before and after training, then he’d have macaroni and cheese with chopped steak at lunch before having fish at dinner time and, finally, peanut butter and grape jelly on wheat bread.

Later meals all tended to be accompanied by a variety of vegetables, including black-eyed peas, string beans and cabbage.

“I eat to live; some people get caught up in the decoration,” Holyfield explained.

He and his trainer take to the beach to work on speed, strength and resistance; first they demonstrate a series of fast footwork drills, then Holyfield shadowboxes with chains weighing his fists down.

He then practices cardio by running while pulling a parachute, and does pushup reps and he does all of this while wearing a weighted vest. He’s at a lean 220lbs right now.

For a man in his prime this would be hard work, let alone a man heading towards his 60s.