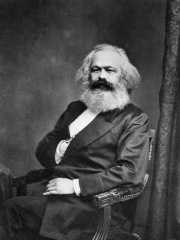 (Marx’s) mode of living consisted of daily visits to the British Museum reading room, where he normally remained from nine in the morning until it closed at seven; this was followed by long hours of work at night, accompanied by ceaseless smoking, which, from a luxury, had become an indispensable anodyne; this affected his health permanently and he became liable to frequent attacks of a disease of the liver sometimes accompanied by boils and an inflammation of the eyes, which interfered with his work, exhausted and irritated him, and interrupted his never certain means of livelihood. “I am plagued like Job, though not so God-fearing,” he wrote in 1858.

Whatever you make of his ideas, let alone their later proponents, it’s undeniable that Marx was astonishingly prolific: an unfinished project to publish his and Friedrich Engels’ complete works is reportedly expected to run to 120 volumes. Yet, Sperber shows, he worked in conditions of profound disorder. To chronic financial anxieties, exile and personal tragedies were added spectacularly stress-inducing work habits: long days and nights of frenzied reading and writing, followed by collapses into exhaustion; a total inability to meet deadlines, even when his family’s wellbeing depended on it; the “impenetrable chaos of books and papers… that was his study”; an obsession with completeness, combined with an inability to resist plunging off into new projects before finishing others; his neglect of personal hygiene. Sperber quotes another historian: “As soon as he had written something down, it was Marx’s habit to stand up and walk around the table, faster and faster, until something occurred to him, and he then sat down again to write.” The more disciplined Engels berated his friend for being so easily distracted that he failed to fulfil his potential. A bit harsh, given that Marx’s work proved moderately influential, but his frustration is understandable.