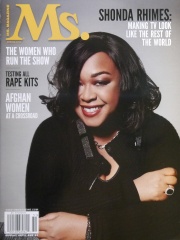 On a typical day, Rhimes is up at 5.30am, that is, unless she’s totally exhausted from the night before. Getting up early is a priority for her, especially with three kids in the house — she adopted Harper in 2002, Emerson in 2012, and welcomed Beckett via surrogacy in 2013. She uses the early morning hours for self-care — journaling, catching up on news, or sometimes just staring out the window.

After breakfast and getting her kids ready for school, Rhimes will get ready to head into the office, but she’ll spend an hour at home working. “I have found that if I spend the first hour of my day at home, I get more done and less people steal my time,” she says. “I think my biggest problem with time is that I need most of it for creative space, [but] there is a giant part of my job that is running my business.”

When it comes time for me to write, I don’t outline and I don’t do any of that stuff. I just sit down and write. If it’s not honest emotionally then it’s not good, and that’s my only rule.

SHONDA RHIMES’ RULES OF WORK: “COME INTO MY OFFICE WITH A SOLUTION, NOT A PROBLEM” | FAST COMPANY

As a showrunner, producer and writer, Rhimes is involved in a staggering number of projects, all of which need her input in some form or another, which means she gets about 2,500 emails a day. The resentment she felt at this absurd number led to her implemeting a rule in her life.

“I don’t read work emails after 7 PM or on weekends,” she told Terry Gross. “Work will happen 24 hours a day, 365 days of the year if you let it. We are all in that place where we’re all letting it, for some reason, and I don’t know why.”

At the end of the day, no matter how busy work is, Rhimes makes sure she gets home to spend time with her daughters. “The fact that I am available and reading nighttime stories to my children every night, I’m very proud of that,” she says. “Because I know a lot of people who don’t make it home until after their kids are sleeping.