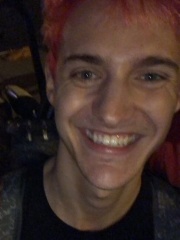 One of the most popular video game streamers and professional gamers in the world, Blevins has become the face of Fortnite Battle Royale, playing online with the likes of Drake and Travis Scott, and boasting over 16 million followers on Twitch.

He’s also amassed 14.4 million followers on Instagram, 6.5 million on Twitter, 24 million subscribers on YouTube, and makes about $500,000 per month from his streaming. Oh, and he’s also the first professional esports player featured on the cover of ESPN The Magazine.

But it’s not all glitz and glamour. Far from it. In fact, on most days, the only thing that Blevins wants is more sleep.

“If I didn’t have to wake up to the alarm it would be the greatest thing in the world. I hate my alarm,” he confessed in an interview. “I slam it and then just slowly roll out of bed, and I’m like, ‘I could probably use another two hours,’ but, you know, got that schedule, dude. If I am five minutes late, I look at that chat and it’s like, ‘Is Ninja late? Is he streaming today? Why isn’t he on?’”

In a 2018 interview with Polygon, Blevins described his exhausting gaming routine, which has him often playing for 12 hours a day, as well as the mentally draining pressure of having to perform in front of thousands of people on a daily basis.

The schedule is: 9:30 is when I start in the morning and then I play until 4, so that’s like six, six-and-a-half hours. Then I’ll take a nice three- to four-hour break with the wife, the dogs or family — we have like family nights, too — and then come back on around 7 o’clock central until like 2, 3 in the morning. The minimum is 12 hours a day, and then I’ll sleep for less than six or seven hours.

There’s also the added pressure of adding and maintaining subscribers. In a New York Times article, Blevins was asked how many subscribers he thought he would be losing by taking out an hour to talk to the reporters. “I’ll probably lose, like, 200 to 300,” he answered.

He also hasn’t taken a vacation in some time, the only exception being his honeymoon, which was only for six days for that matter. “That was devastating. It was a calculated risk,” Blevins admitted. “My wife knew. God bless her, we’ve been together for almost six years now.”

Streaming makes you super self-conscious. You have to be the most sure person on the planet if you’re going to get into this and not be completely torn apart.

TEENAGERS MADE NINJA A GAMING SUPERSTAR. HE HAS A MESSAGE FOR PARENTS. | NEW YORK TIMES