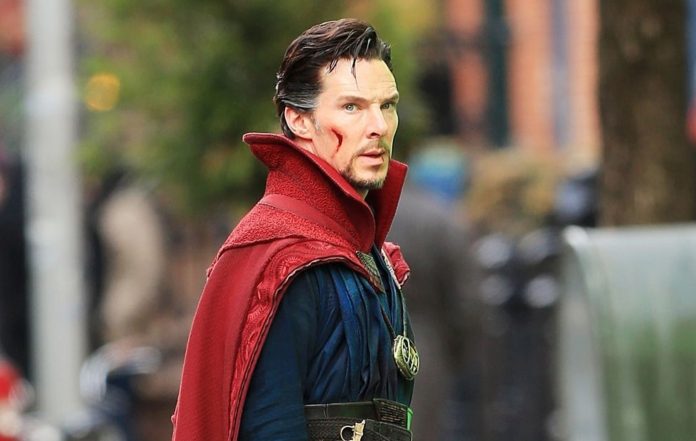 Unlike Cumberbatch’s other roles, Doctor Strange required him to bulk up and be in great shape.  In an interview he explains:

“I started working out for this film, not just to be bigger to fill the suit so to speak of being this superhero, but also for endurance, to be able to take knocks, to be able to do multiple takes of fight scenes over five days and to do an action sequence at the end of the film.”

The 40 year old star went on to discuss more about his training, incorporation of yoga, and how it was some of the hardest workout sessions he’s ever experienced.

Some of this discussion involved him sharing:

“I did a lot of training and I did a lot of eating,’ he said of the routine. ‘By the end I could do handstand press-ups, feet up against the wall, lowering my head to the floor and pushing up.”

Doctor Strange has as muscular a body as any superhero, and actor Benedict Cumberbatch recently described what his hero training regime was like.

You eat very well, you get trained by brilliant people, you work out and you do yoga, you have a physio if you injure yourself, you do stunts, you do running, you have someone editing your diet. It’s all handed to you. It’s not that hard. You just really have to apply yourself. We’re lucky. People would kill for that kind of experience. As long as you do it sensibly, it’s safe. There are good ways of doing it and there are bad ways of doing it. You can do a body-building thing where you’re destroying your body to rip new muscle or you can do it the way I did it, which is quite diligently, over a long period of time, with a healthy diet. Replacing Alcohol with Yoga – according to a 2018 Film News article:

Asked in an interview with Britain’s Radio Times magazine if he’d ever had addiction problems, he said, “No. I’ve had the opportunity; but even with that thing of having a glass of wine when the kids have gone to bed, I’m like, “I’m quite tired, and I don’t really fancy that glass of sugary alcohol.”

Benedict welcomed Christopher, his first child with wife Sophie Hunter in 2015, and their second son Hal last year – and the doting dad revealed that although he’ll occasionally indulge at a party, he’s replaced regular drinking, with yoga and meditation. “I’m very happy with near-sobriety,” the British actor added. “I have the odd blow-out, now and again – a big birthday, or crazy weekend at a festival – but I prefer yoga and meditation.”

After Stephen’s death at the age of 76 in March (18), Benedict told how he’d miss their sessions drinking margaritas together and promised to drink one in honour of the late physicist.

He’s never wanted to take drugs – having been put off by scenes in Trainspotting, Danny Boyle’s 1996 drama about a gang of Scottish heroin addicts.

“I remember when I saw Trainspotting I’d never taken any drugs, and people said it was glamorising them, and I thought, ‘What is glamorous about this?’,” the clean living actor explained. “Do I want to wake up having nightmares in my parents’ bedroom, with babies crawling on the ceiling? Do I want my friend to be dying of AIDS because of a dirty hypodermic (needle)? Nothing about this would induce me to do drugs. ”