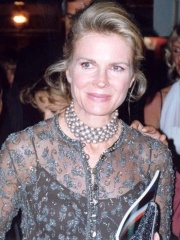 Candice Patricia Bergen (born May 9, 1946) is an American actress and former fashion model.

“In the past 15 years, I have put on 30 pounds,” the actress writes in her new memoir, A Fine Romance

Candice Bergen has no shame in following a bread basket with a bowl of chocolate ice cream.

The Murphy Brown actress, 68, addresses her latest approach to health and happiness in her new book A Fine Romance, in which she denounces dieting and fully embraces carbs.

“Let me just come right out and say it – I am fat,” she states bluntly in the upcoming memoir, which was excerpted on the Today show in 2015.

“At a recent dinner party I shared bread and olive oil, followed by chocolate ice cream with my husband,” Bergen shares in the book. “A woman near me looked at me, appalled, and I thought, ‘I don’t care!’ ”

The former fashion model also adds that she’s not on board with the binging and purging habits of her “skinny friends,” who she believes must be “miserable.”

“They maintain their weight by routinely vomiting after major meals consisting of a slice of steak or a filet of fish. I am incapable of this,” she says, admitting that dieting efforts have always fallen second to cravings.

“I crave cookies all the things that dilate my pupils,” the actress jokes in the tell-all.

In A Fine Romance, Bergen delves into big personal events, including her marriage to French director Louis Malle, her daughter Chloe’s birth, widowhood and falling back in love. Penned as a follow-up to her 1984 book Knock Wood, the new autobiography hits shelves April 7.