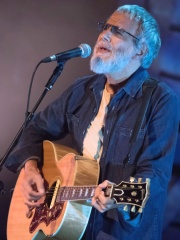 Ordinarily an American rather than British attitude, it came from being the son of a Greek Cypriot villager born poor but determined to work his way up and out no matter where it took him. Eventually, his father owned a restaurant. Whereas it seemed that Steven Georgiou, a.k.a. Cat Stevens, could own the world.

Then he took a swim at Malibu and nearly died.

“Without warning a strong current carried me out to sea,” he recalls. “My whole life flashed in front of me, as they say, but I knew someone was there and I said, ‘Oh God, if you help me I’ll work for you.’ Anyway, a wave came from behind me and gently pushed me towards the shore and then I had all the energy I needed to get back.”

The following excerpt was taken from a 2000 interview with the LA Times:

He concludes his tour of his childhood in Denmark Street, London’s Tin Pan Alley, center of the British pop music industry until the Beatles came and threw the hacks out of the temple.

“I recorded my first demo over there,” he says. “The old carpenter who fitted out my dad’s restaurant lived down that alley.”

He proposes driving up to Willesden, the slightly up-market northwestern suburb where he lives and runs his four Islamic schools. On the way, he drops by the Central Mosque to pose for pictures, peers at a gym in passing and murmurs “One day,” then pulls up at his boys’ school–where rather awkwardly he has to ask his female public relations agent to wait in the car.

Like every teenage lad in Britain, at break time the boys outside play soccer. Until they notice Islam. Then all eyes turn his way and, unprompted, they form a line to shake the hand of this evidently revered elder and benefactor. They all say, “Hello, sir.” He greets most of them by name and gives them the luminous smile.

Next stop, just up the road: coffee at the hotel one of his charitable trusts bought to help finance the schools. Muslim-friendly, but all welcome, he affirms.