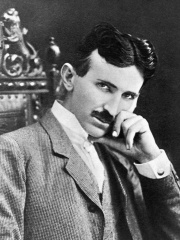 In an interview in 1933 when Tesla was already 77 years old, he revealed some details about his habits, including his diet and the activities he undertook to keep fit. Both aspects were especially important to him because, as he put it, both a poor diet and a lack of exercise translate into “toxic conditions in the body and make it impossible to throw off the accumulated poisons.”

What did Tesla do to hold off those toxic substances? He declared:

Avoid foods related to the generation of acids (such as peas or beans).

Eat fish and meat rarely. (“Fish is reputed as fine brain food, but has a very strong acid reaction, as it contains a great deal of phosphorus,” he held.)

Eat potatoes, at least once a day, for their “valuable mineral salts.”

These measures betray, as can be seen, that one of Tesla’s greatest fears was acidity. In his view, acidity was “by far the worst enemy to fight off in old age.”

As for exercise, the inventor used to walk a little over ten miles per day, and took hot baths followed by cold showers. Both activities maintained the body at a level of activity above what is acceptable and necessary.

It should also be mentioned finally that, for Tesla, sleeping more than four or five hours a night was but a luxury allowed only once every several months. And by these habits, he reached 86 years of age.