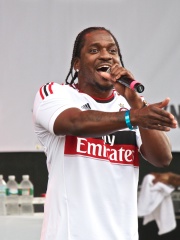 Between 9am to midday, Thornton is a music executive making phone calls, taking care of business and most importantly, on the look out for new artists. “I’m on every call, every day. I’m on the phone with Kahri’s manager every day,” he told Complex. “I speak to him 30 times a day. Right now, I don’t think I can’t be hands-on. It’s not a label that is functioning on all cylinders, so I want to be a part of everything.”

After midday though, he makes the switch over to artist mode and focuses on his writing. Unlike most rappers, Thornton rarely spends nights in the studio. “I’m not writing after 10 o’clock at night. My brain doesn’t even work after, it might not even work after nine.”

Coming up in the early 2000s under the tuteluge of The Neptunes, made up of Pharrell Williams and Chad Hugo, Thornton was trained to write and record songs during the daytime, so they could spend nights at the club listening to the hottest songs out at the time.

I personally learnt to create from 10 in the morning until 9pm. Because at 9pm, we had to go eat and we had to be in the club by 11 or 12 to see what we were competing against. And that’s really literally what we went to the club for. We wanted to hear new music. We wanted to hear and see what people were reacting to. And that all happened in those hours. I just learned about like midnight music sessions and I don’t stay in the studio past midnight, 4:00 AM for what? All night for what? Why are we doing this? I will never understand it.

Thornton’s day never really ends though. Even when he’s gone to sleep, discovering new acts stays on the top of his mind.

In 2010, Thornton signed to Kanye West’s GOOD Music label and started recording songs for the seminal My Beautiful Dark Twisted Fantasy. Thorton, who was in Sweden on tour at the time, racked up a ton of frequent flyer miles from those recording sessions.

In 2018, the rapper-producer duo linked up again for another creativity fuelled recording session, although the cirumstances were slightly different from 2010. the location was a luxury resort in Wyoming, not Hawaii; the project was Thornton’s third album, Daytona; and West was in need of some time off after some hectic months in the media.

Holed up in Wyoming, Thornton and West created a list of their 25 favourite records, which included “Devil’s Pie” by D’Angelo and Raekwon’s “Glaciers of Ice” and “Incarcerated Scarfaces.” The pair trawled through over 6,000 records to find the perfect sound for Thornton’s album, and in the process, found inspiration for other artist projects, including Kid Cudi, Teyana Taylor, Nas and West himself.

“You go to Amoeba Records in LA, you grab a whole bunch of records, you buy a bunch, you load them up, and you listen to them. That’s what he does. That’s his process,” described Thornton. “That’s what I’ve seen him do for me and for all of those projects. Like I said, he finds a sweet spot and creates the magic from there.”

Daytona represents the fact that I have the luxury of time. That luxury only comes when you have a skill set that you’re confident in.