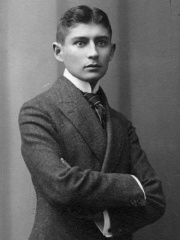 Franz Kafka (3 July 1883 – 3 June 1924) was a German-speaking Bohemian novelist and short-story writer, widely regarded as one of the major figures of 20th-century literature. His work fuses elements of realism and the fantastic.

Worked his day job at the Workers’ Accident Insurance Institute.

Time with family (and dinner).

As Zadie Smith writes of the author’s portrayal in Louis Begley’s biography, Kafka “despaired of his twelve hour shifts that left no time for writing.”

[T]wo years later, promoted to the position of chief clerk at the Workers’ Accident Insurance Institute, he was now on the one-shift system, 8:30 AM until 2:30 PM. And then what? Lunch until 3:30, then sleep until 7:30, then exercises, then a family dinner. After which he started work around 11 PM (as Begley points out, the letter- and diary-writing took up at least an hour a day, and more usually two), and then “depending on my strength, inclination, and luck, until one, two, or three o’clock, once even till six in the morning.” Then “every imaginable effort to go to sleep,” as he fitfully rested before leaving to go to the office once more. This routine left him permanently on the verge of collapse.

Might he have chosen a healthier way? When his fiancée Felice Bauer suggested as much, Kafka replied, “The present way is the only possible one; if I can’t bear it, so much the worse; but I will bear it somehow.” And so he did, until his early death from tuberculosis.