“To stay in shape, I take walks on the beach, I do Pilates, I do gyrotonics, I do light weights. I try to eat healthily but I’m never on a diet or anything. everything in moderation, it works for me.”

When asked about eating only one meal a day, Seymour revealed that it’s actually a “good trick” on her end to staying fit.

“That’s actually been a good trick,” she noted. “Well first of all, cup of coffee first thing in the morning.”

“Usually I’m up and running like now then I usually forget to eat until midday. My partner David is doing this intermittent fasting so his big meal is around 2 p.m., so now that becomes lunch,” she continued.

“In the evening, if I’m feeling peckish I will eat some pistachio nuts and a glass of wine,” she concluded. She mixes it up with pilates and putting.

Seymour heads to the golf course often to improve her game and get some light exercise. When she’s not working on her swing, she’s often in the gym using a Gyrotonic machine as part of her pilates routine. And she’s seriously devoted to her workout — she’s reportedly been attending Pilates classes for 30 years!

She works on her core with isometric exercises.

Isometric exercise is any move where your muscles are engaged but not contracting, such as plank pose. Seymour says she practices these moves to maintain a flat, toned stomach.

“With isometrics, you’re isolating and engaging the stomach muscles to strengthen them. It has given me really strong stomach muscles, and I have a longer, leaner look than before,” she said in an interview with Lifetime.

She takes it easy sometimes.

After a spinal surgery to fix a herniated disk more than 10 years ago, Seymour is careful when it comes to exercise. She doesn’t do intense yoga or use a cycling machine.

“I have a hot shower before I exercise. I get on the treadmill for 10 minutes to half an hour, and I also do light weights very carefully,” she said in the Lifetime interview. 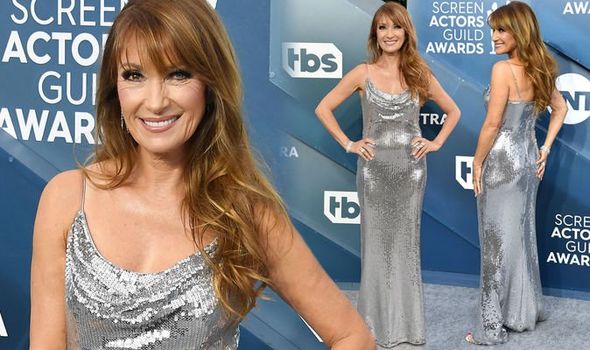 She snacks on home-grown veggies.

The actress reportedly doesn’t eat any junk food, instead she chooses to snack on produce she grows in her very own garden. Also, as she demonstrates in the video, it’s good for more than just eating — lifting a full basket is basically weightlifting!

She indulges with white wine.

Seymour’s mother was a sommelier who taught her about different kinds of wine. Seymour’s favorite wine is reportedly a sweet French white wine, though she’s also very fond of Californian wines.

She refuses to get Botox … ever again.

The actress says she’s tried Botox once before, but she didn’t like it.

“I tried Botox but didn’t like it,” Seymour told The Express. “I could see it in my face and I can see it in other people too … I’d rather be the best I can be at the age I’m at.” Besides, she says, she likes her wrinkles too much to eliminate them.

She runs around with her grandkids.

The mother of four and grandmother of three loves spending time with her family. In a recent interview, she gushed about being a grandmother, saying, “The wonder of these small children makes you feel alive and needed. Spending time with them is all about unconditional love.”

She told Closer, “They make me realize that I have to stay healthy because I can’t wait to show them the world!”