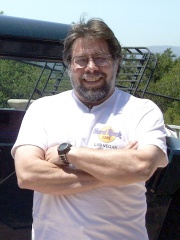 What gadgets and software applications do you use on a day-to-day basis?

Steve Wozniak: I have such a crowded life and crowded schedule. When people send me a link with a gadget, I’ll look at it and buy it if it looks interesting, but I don’t have time to check out everything I’d like to.

I do have a Nixie Tube watch, which I get a lot of benefit from. The biggest benefit in my life comes from my Segway, which I use everywhere I am. If I’m going to San Antonio, for example, I’ll load it in the car and just go everywhere with it. The other crucial thing is my Verizon wireless card, which I have to have because hotel Wi-Fi is just so unreliable.

… I have one MacBook Pro, with a 17-inch screen. I got into that and consciously separated myself from having 3, 4, 5 computers in my life, which just became too much. As far as the mobile devices, I’ve gone through all the different smartphones, all the different gadgets. For a while I was using a Razr for voice and messing with mobile devices, but now I’m traveling with an iPhone and a BlackBerry. I don’t use them very much for email, though, unless I’m detained for a long, unexpected stretch. I save answering my email for when I’m going to be in front of my nice, comfortable keyboard.

The scariest part of my job is …

Someone finding bugs in my work. In the early Apple days, it would have been bugs in hardware or software.

In fact, the Apple I did have a bug that was discovered by others. I had forgotten to add what are called pullup resistors to the unused inputs of chips on the Apple I. This is a standard operation but I had forgotten to do it. It’s hard to say how bad this was. In a noisy electrical environment, it might have led to false signals.

I was also afraid of conflict and afraid to deal with people. The world is much more complicated now and I have more confidence.

I’m more afraid now that when I travel constantly, so to speak, my family will wonder if I’m a real, permanent dad. I have young dogs, which are like infants to me. I hold them in my arms and talk to them and give them so much love. They look in my eyes with love in their hearts. How do they know why I leave them for days or weeks at a time? Will I have to re-establish my relationship with them when I get home?

If I could tell my 18-year-old self one thing, it would be …

I’d say to be exactly as you are, Steve. I have no regrets about any of my life past some age.

I found my way and knew who I was. I knew that I had a good head to figure out what was right and wrong in life. And in engineering, I stick by decisions that came from a working system of rationality.

The thing that brings me the most joy is …

Hearing that I made a positive difference in a person (or a pet’s) life.

I love my family and doing things all the time with my wife, Janet. We talk about every decision and they are all joint and we really are one person. We have tons of fun and enjoy the same things.

If I could have dinner with any influential figure from any time period, it would be with …

Socrates, because he had a way of thinking about things philosophically, and he knew that those in high positions were not all that special. I’d like to ask Socrates his opinion of luck, too.

The thing you probably don’t know about me is …

I have always been sensitive and can’t hurt or even get in the way of others. I try to be only equal to all others. I cry easily when things are not right yet, or when things have great beauty, like songs or pictures or artwork or movies.

A standup comedian because I love to make people laugh.

The best piece of advice I’ve ever received is

My father had different values about some things around the Vietnam War, but he told me that he hoped I always maintained my idealism. Sometimes a person with a heart of gold needs to be told they have one, or else that idealism won’t come out.

My advice to young people searching for their inspiration is

Don’t look for it in others. Use your brain to think out your formulas for life, for behavior and values and ethics and morals. Figure out the answers over months or years before your personality settles down for life. This is usually between ages 18 and 23, the college years.

Mr Wozniak said he wasn’t criticising people who wanted to buy the Apple Watch Edition, which will start at $14,000 in Australia, and said it appeared to be a nice watch, worth the sum of its expensive parts.

“I’m just not going to buy it for jewellery’s sake until I know it’s something I’m going to want around me and on me and use every single day continually as a permanent part of my life,” he said. “Then maybe I’d consider looking into getting the nicer jewellery version.”