Bruce Willis works out with celebrity trainer Gunnar Peterson, who is a proponent of peripheral heart training. The Die Hard star works with Peterson to alternate upper and lower body exercises so his heart is forced to shunt blood around – this keeps muscle groups balanced, creates stronger movements and burns body fat. Other benefits of peripheral heart training include improved circulation, better skin tone, stronger bone density and more energy.

We can all agree that Bruce Willis is an grade-A Bad Ass in his Die Hard movie installments.  Guys, want to be him and girls want to be with him.  However, his muscular body displayed in fight scenes and action stunts did not come without some good old fashion hard work. 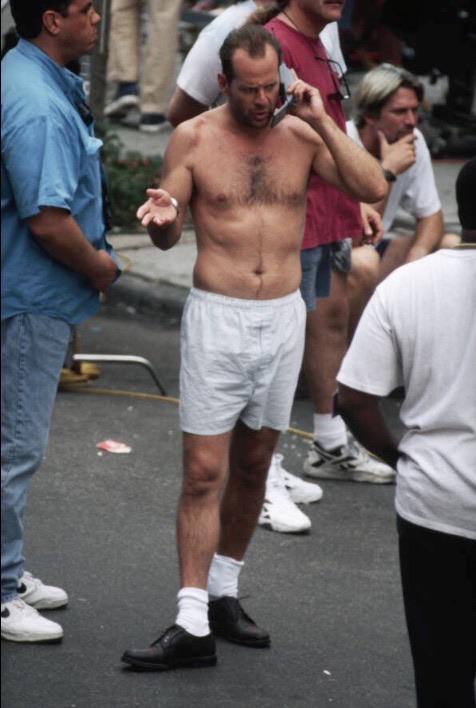 To keep up with the physical demands these films have put on his body, Willis is adamant about staying in shape.  While he admits he isn’t getting any younger, Bruce feels that with a strong workout routine, he is able to deliver in the Die Hard series.  Celebrity fitness trainer Ricardo Macedo does shed light on the fact that it may have been harder to get into shape for the last Die Hard film.  “With these men, because of their age, their metabolism has slowed down, they’ve put on weight and their body fat percentage has increased.”  Macedo goes on to say that because of this, actors like Willis have to put in extra hours in the gym compared to the younger guys.

Bruce now trains for different reasons, than he did in the past, he say,  “Weight training on a regular basis, cardio just about daily. The idea really was not necessarily that I wanted to look like I was in shape or that I wanted to look chiseled, because I never really take my shirt off in the film. But I needed to get my muscles big enough to protect my bones, so when I was diving off of things onto the concrete floor my bones wouldn’t break. Less vanity and more safety, I would say.”

So even though the muscle he builds is mainly for protection and safety, the results don’t look half bad!  With defined arms and a strong core, Willis has enough protection for his bones during stunts, but also has the benefit of looking good while doing it!

Willis is even proving that those who hate to workout can still get into shape and enjoy the benefits of being healthy.  Bruce was quoted saying, “I hate working out. I work out for films solely. I associate working out with films. As soon as they stop, I stop working out.”  While this isn’t a super mindset to have, it shows that if you have a goal in mind when training (preparing for a movie role, looking chiseled, losing weight) you can achieve it, even if you dislike exercising.  Bruce is brutally honest about his dislike for exercise, but he still gets the job done on screen and at the gym.