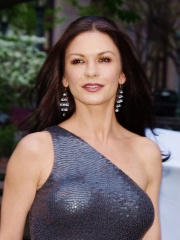 She gets up before anyone else to enjoy her first coffee in silence. “I really can’t do anything properly without my coffee,” she said. She likes brewing it in a French press because it has a sort of a “nostalgic” feel to it. 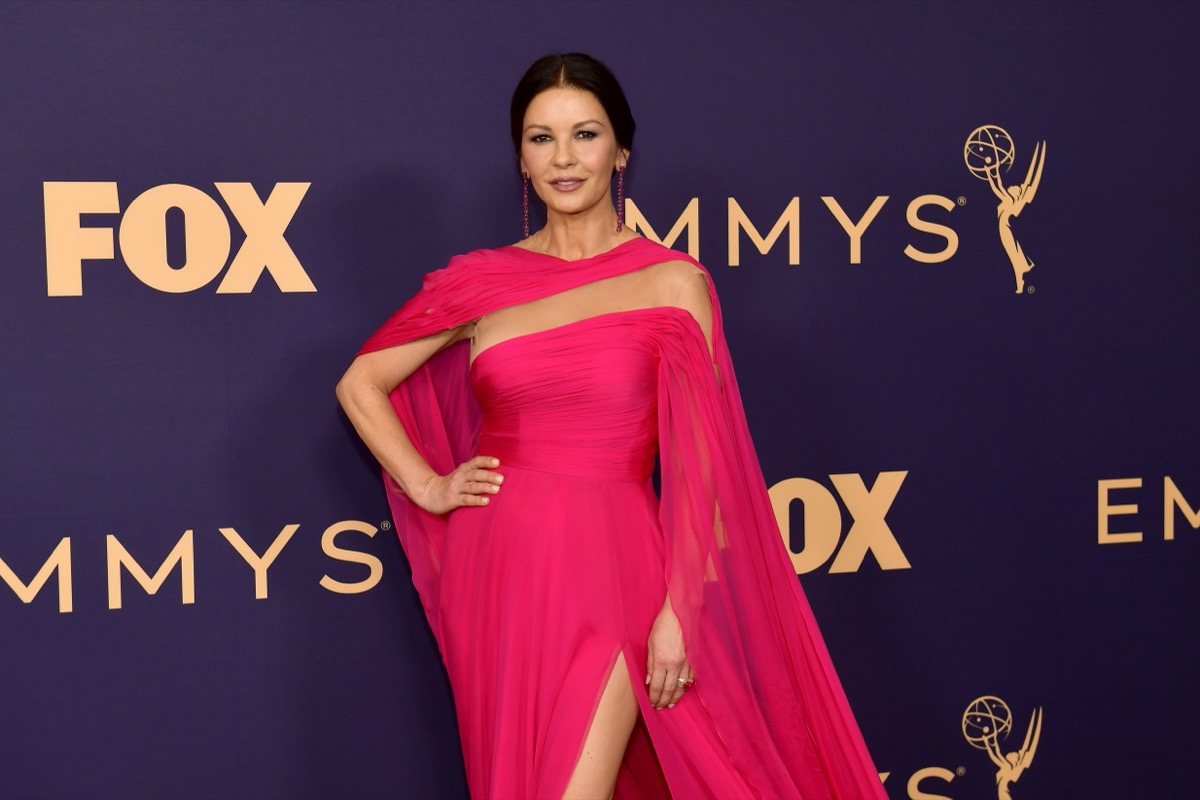 She has “very specific” breakfast needs.

There’s no doubt that Zeta-Jones is a “three meals a day kind of girl,” she said, and when it comes to breakfast, she always has one of two things depending on the time of year.

“In the winter hours, I’m a porridge girl,” she explained, which she makes with brown sugar, bananas, and blueberries. In the spring, she switches to non-fat vanilla yogurt topped with Bare Naked granola, blueberries, and raspberries. That’s only during the week, though.

When the weekend arrives, all bets are off, and the family enjoys what she calls “a good British fry-up” complete with imported British bacon, sausages “which we call bangers,” baked beans, scrambled eggs, “and for the American contingent of my family,” Martha Stewart’s French toast recipe with all the good stuff—brioche bread, cinnamon, and vanilla. “Every weekend it comes together in a fabulous family brunch. We love it. I look forward to it all week,” she explained.

Jones takes multiple drink breaks throughout the day, and this one she likes to pair with “a cookie or something.”

“I’m not a big snacker, except for anything chocolate,” she said. “For me, chocolate is a real treat. I deserve it.” Her favorite is Cadbury’s milk chocolate—a classic. “It’s a British brand that I was brought up with and it’s very comforting,” she added. 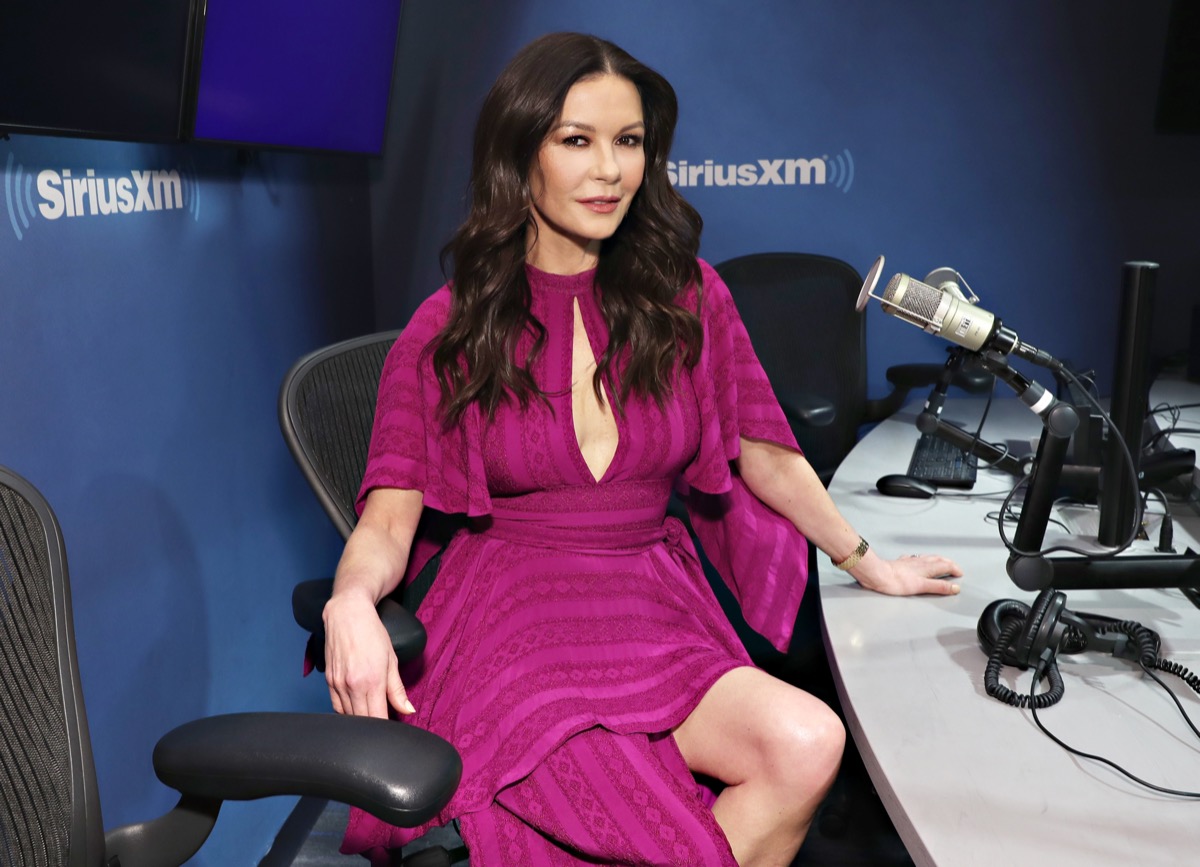 Lunch is better with company.

When she’s not working, the Rock of Ages star always has lunch with her husband, Michael Douglas. “We’re big on family meals … we stop and we sit down and we have lunch,” she said. On the menu is “lighter fare” that always includes a salad. Her favorite is a mix of spinach, arugula, pine nuts, “big, ripe” tomatoes, blue cheese, dried cranberries, and a dressing of olive oil, balsamic vinegar, and mustard.

“I have a salad every meal other than breakfast because I just adore it,” she admitted. Accompanying the greens is typically grilled chicken, grilled cod, or stuffed eggplant: “Something light that doesn’t weigh me down too much.”

The actress has no choice but to enjoy her very own Casa Zeta Jones coffee. “I love it because it’s my blend and it’s the kind of coffee that I love,” she said. And if she’s ahead of the game, she will have already baked fresh scones which she loves to top with clotted cream and jam—the traditional British way. 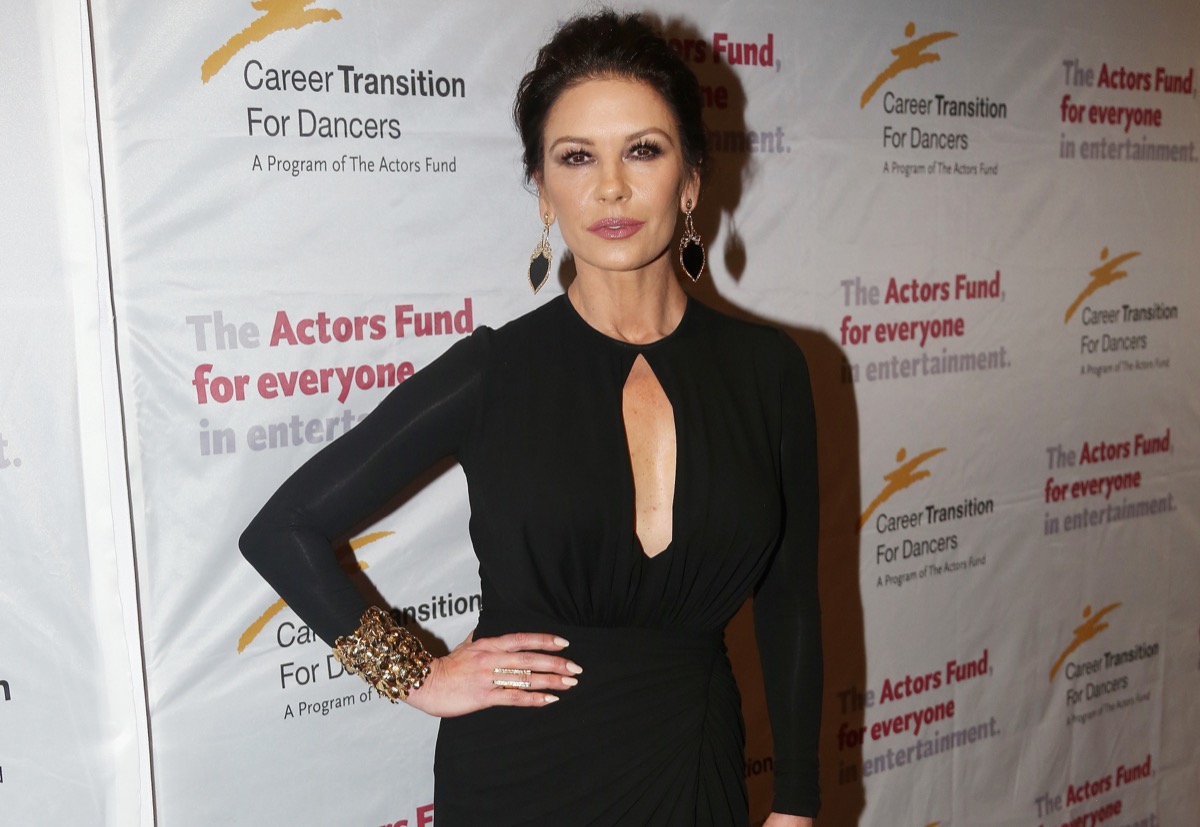 And that’s early for her—when she’s in Europe, she eats later.

Another salad starts the meal, this time of apple, avocado, oranges, and figs. And although she typically prefers fish and white meat, she occasionally loves “just a regular filet mignon” paired with homemade mushroom sauce and a bunch of fresh sautéed veggies. She also likes to bake cauliflower whole and cover it with melted cheese—a comfort dish her mom used to make.

Her favorites are a good ol’ scoop of ice cream or slice of apple pie, particularly her mom’s recipe.

But she stays far away from tripe (cow stomach, but who wouldn’t?) and MSG (her body doesn’t react well to it). Otherwise, she loves experiencing and enjoying food. “Some people say, do you live to eat or eat to live?” she reflected. “I’m somewhere in between.”

In an interview with W magazine earlier this year, she revealed that her exercise routine involves “swimming, tennis, Peloton, my home gym and tap dancing.”

Speaking to the Telegraph last year, she said: “If I become a little lethargic or lax in the physical part of my life, I get stressed. So I swim. I have one of those pools where I can swim against the tide.

Known for her Oscar-winning performance in the movie Chicago, the star also revealed: “When I moved house, I put down tap boards and made a tap-dancing space.”

Discussing the secret to her looks, she says, “I don’t drink and I don’t smoke, but I love beautiful creams and oils. I am 51 years old and I’ve always looked after myself – but as you get older, I find you have more of a regime. Now, I cleanse my skin much more gently that I ever did before and I stay active. I work out.” 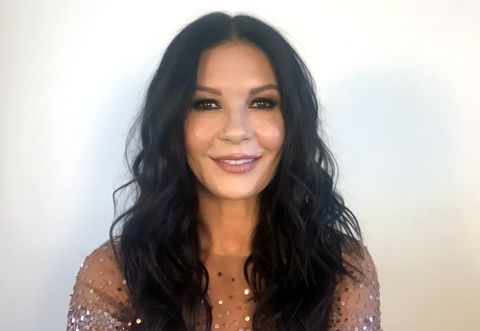