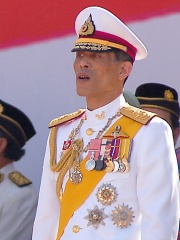 Despite his important role in Thailand, Maha Vajiralongkorn doesn’t seem to spend a lot of time in the country.

He appears to spend most of his time in Germany instead and is believed to have a home on Lake Starnberg, 25 miles from the Grand Hotel Sonnenbichl, per Bild and The Times of London.

Though he was officially named Crown Prince in 1972, aged 15, he actually spent much of his childhood outside Thailand.

He was sent to school in England from ages 13 to 17, before enrolling at military college in Australia until 1976.

He attended prep school at 13 before moving on to the prestigious Millfield boarding school, where he finished at 17.

He then attended Royal Military College, Duntroon, in Canberra, Australia. He graduated in 1976.

He struggled to keep up at school in England and Australia, blaming his upbringing in the Thai palace, the BBC reported.

After graduation he joined the Thai army, where he served as an officer and worked for most of his life.

He is a qualified pilot on both civilian and military aircraft, and flies his own Boeing 737 when he travels overseas, BBC reported.

He has received military training in Thailand, the UK, US, and Australia.

In August, the Thai royal household gave a glimpse of what life is like there by releasing rare photos of Wongvajirapakdi wearing a crop top and piloting a plane.

On top of this the king has a reputation for womanizing, having fathered seven children by three women.

He has had numerous acrimonious divorces in the past.

His mother, Queen Sirikit, reportedly once described her son as “a little bit of a Don Juan” in the early 1980s, per The Guardian.

She also suggested that her son preferred spending his weekends in the company of beautiful women over carrying out his formal royal duties, BBC reported.

He’s a keen cyclist, and has regularly led mass biking events in Bangkok in the past.

He participated in the “Bike Un Ai Rak” or “Bike Love and Warmth” event in December 2018.

The eccentric king is also known for his love for dogs.

When his pet poodle Foo Foo died in 2016, he gave him a four-day-long Buddhist funeral ceremony, per The Sun

He used to dress Foo Foo up as an air chief marshall and take him to formal events, The Guardian reported.