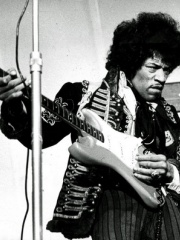 1. Any instrument will do (you could even make your own)

Maybe this is the perfect opportunity to pick up that guitar that hasn’t been touched for years. Or whatever musical instrument you happen to have lying around! As Hendrix himself said, he would play anything he could get his hands on before he finally settled on the guitar.

“My first instrument was a harmonica, which I got when I was about four, I suppose. Next it was a violin. I always dug string instruments and pianos, but I wanted something I could take home or anywhere, and I couldn’t take home a piano. Then I started digging guitars.”

If you don’t own any instruments, just use what you have. Before he was given his first guitar, Hendrix would just strum a broom as if it was a guitar. Then he moved on to an old one-string ukulele that his Dad found.

Whatever skill it is that you’re trying to master, just keep practicing. Although Hendrix is still considered the greatest guitarist that ever lived, it was through hard work and dedication as much as natural talent. This quote from Jimi pretty much sums it up:

“It was so hard for me at first. I knew about three songs, and when it was time for us to play onstage I was all shaky, so I had to play behind the curtains. I just couldn’t get up in front. And then you get so very discouraged. You hear different bands playing around you, and the guitar player always seems like he’s so much better than you are.

Most people give up at this point, but it’s best not to. Just keep on, just keep on. Sometimes you are going to be so frustrated you’ll hate the guitar, but all of this is just a part of learning. If you stick with it you’re going to be rewarded. If you’re very stubborn you can make it.”

3. Play along to your record collection

Entirely self-taught, Jimi’s inability to read music made him concentrate even harder on the music he heard.

“I learned all the riffs I could. I never had any lessons. I learned guitar from records and the radio. I loved my music, man. I’d go out to the back porch there in Seattle, because I didn’t want to stay in the house all the time, and I’d play guitar to a Muddy Waters record. You see, I wasn’t ever interested in any other things, just the music. I was trying to play like Chuck Berry and Muddy Waters. Trying to learn everything and anything.”

Military precision is not the first thing that comes to mind when you think of the lifestyle of your average 60s musician. It was, however, something that came naturally to Private James Marshall Hendrix of the 101st Airborne. Jimi’s stint in the military is well documented, but a little-known knock-on effect was the domestic habits it instilled.

Despite his nocturnal lifestyle and leisurely afternoon awakenings, Hendrix could never be accused of being messy. Going against the stereotype of the rock star’s abode, Jimi’s bedroom at 23 Brook Street was kept remarkably clean and tidy, with a photographer from the time, Barrie Wentzell, confirming the surprising abnormality of its appearance: “it was very tidy, very homely, not a mess at all – unlike my place.”

While we cannot say whether tidiness helped with creativity, we can say that Jimi thought himself at his most creative when sat in his room “just laying around daydreaming or something”- so it can’t have hindered it. Perhaps we should follow in Jimi’s footsteps and use this time productively to make sure our own rooms would pass an inspection by the man himself – or maybe laying around in bed daydreaming, conjuring up a new musical masterpiece sounds more appealing? We’ll let you be the judge of that.

5. Bring the restaurant to you

Britain in the 1960s wasn’t likely to be on many food lovers’ bucket lists. In contrast with America, our capital’s food scene left a lot to be desired, and Jimi Hendrix desired it most of all. The food quality, or lack thereof, was his biggest gripe about the country he now called home. His lack of cooking skills meant that he was often reliant on his girlfriend Kathy Etchingham, someone equally inexperienced in the kitchen. Despite her best efforts, Jimi did not take to her home cooking, which Kathy had little interest or inclination to improve, and it led to many of their most deafening “disagreements”.

Perhaps we should all follow Kathy’s advice to Jimi which was simply “Why don’t you cook it yourself?” (or words to that effect). It was not all bad though – following a row about food, Kathy stormed out, and upon her return was handed “a piece of paper with ‘The Wind Cries Mary’ written on it” (Mary being Kathy’s middle name, one Jimi used to irritate her). The creative benefits of staying indoors are plain to see once again.

When indoors, they were usually reliant on restaurant food, particularly from Mr. Love’s Café downstairs, but in this time of social distancing such luxuries should remain as such. Perhaps we should do what Jimi did not, and learn to bring the restaurant to ourselves – and thank our lucky stars we have access to such a plentiful variety of foodstuffs, and do not have to make do with the food Jimi was served up in 60s Britain, food so lacking in taste that it “blew his mind”; no mean feat.

6. Small gigs are the best gigs

Happiness for Jimi Hendrix, guitar-god of the late sixties (sorry Mr Clapton), would surely be in front of adoring crowds of tens-of-thousands, wouldn’t it? Ground-breaking performances at Woodstock or the Isle of Wight festival? This may well have been where his fans were happiest, but for the man himself the shows he enjoyed most were much less showy. Before fame really took hold, before record contracts and gruelling touring schedules demanded by his label; this was where Jimi Hendrix thrived. “That was his best music ever – played for its own sake. None of these crazy expectations, no one hanging on – just the people he knew, liked and trusted, and his own music.”

The loss of gigs and concerts is a tragedy for all of us music lovers at the moment, but we can take solace in the fact that smaller gigs are always better. We can take the lead from Jimi and stage the smallest gigs we can, to those in our houses who, hopefully, we like and trust the most. No record labels breathing down our necks, forcing us to play the hits, no fancy equipment that will only malfunction anyway; just us, an instrument and our favourite songs.

We have room to experiment, as Jimi loved to do onstage, and wow our friends or families with an 8-minute improvised solo played with our teeth and behind our heads; a phrase to spark joy in those literally unable to leave. However we choose to entertain those near us, the most crucial thing is just that; it is played to those near us. We all have to do our bit to stay indoors and get through this with those we love, and music is the universal way to do it. What is a gig anyway but a singer, a song, and someone to listen?

Picture the scene. Six legs tearing after one another, ears trailing behind like two parachutes; the sound of giggling laughter echoing close behind. A blur of fur, speed and chaos. No, not the proposal for a low-budget sketch, but a day in the life of a musical great and his canine companion: one Jimi Hendrix and one Ethel Floon. In the short time that they were together, Jimi and Ethel would race around their flat, with the Basset Hound pup occasionally tripping up on the features which inspired Jimi’s nickname for her: the “Queen of Ears”. Adored by all, though not blessed with the keenest mind, Ethel was bought on a whim, after Jimi had expressed to Kathy his desire for a dog – having had one as a child and remembering it “with fondness”. But the fun didn’t stop there: Jimi and Ethel played another game indoors, where Jimi would spin her around on a swivel “Mastermind” chair, as she “flopped back and relaxed”- Jimi once getting rather too eager and causing Ethel to be sick as, well, you get the idea…

Jimi, then, was perfectly happy to stay indoors with his furry companion, and proved that you don’t have to venture out into the world to have a great time with your pet; something which needs remembering now more than ever. Any pet lover will tell you of the calming effect of their quiet companion, or the hilarity that their more energetic moods inspire, and Jimi was no exception. Just make sure you know when to say stop.