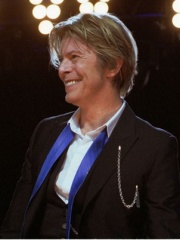 Having struggled for a decade to make it in an industry which he often thought was collectively conspiring against him, little was left to chance, and the ruthlessness with which he assaulted his audience when he finally did become successful was only matched by the extraordinary quality of the material, and the stagecraft, that he used as ammunition. Whereas in the 60s Bowie was always slightly behind the curve, as the 70s clicked in he inched ahead of it, peering at the future through a Manichean viewfinder.

He showed that what he was doing was not a trend

He wasn’t interested in fashion, but rather a direction, one that would change on a whim, or indeed with the wind. He excelled at the art of individualism, rarely tacking towards the centre, and relentlessly moving forward. In this age when there is indiscriminate access to almost everything, it would have been difficult for Bowie to operate so successfully, but back in the 70s he was a divining rod, his own as well as ours. His talent was so immense it was often bewildering. But then he’d learned how to use what “little” talent (his term) he had to its fullest effect. Bowie often said that God’s cruellest gift was bestowing only a modicum of talent on a person, and yet he exploited what he had in a way that was all consuming. He was a fascinating fusion of ambition and craft, coupled with an innate charm, and – after that first unsuccessful decade – an often unerring sense of timing.

He deployed his curiosity as an analytical torch

He repurposed material in completely original ways, rarely embarrassed to claim something as his own. In that first, formative decade of his career, Bowie’s work bore a relation to many forebears, and it was only with “Space Oddity” that he showed that he had a mind of his own, and genuine human purpose. (Having said that, at the time this was considered to be something of a novelty record, and it could have simply been regarded in the years afterwards as nothing more important than “Rock Me Amadeus” by Falco, for instance, a novelty tie-in from a different era.) There are many who think that Bowie was unrelentingly calculating, carefully building his personae and his records like a bomb-squad technician, deciding which colour wire to snip, petrified that a mistake would end his seemingly inexorable righteous passage. In reality, he just mixed things up as he went, using bits and pieces he’d collected along the way. And boy did he collect.

He was the most competitive pop star of them all

“There was always an exchange of information within our friendship,” said Mick Jagger, after he died. “And I suppose there was always an element of competition between us, but it never felt overwhelming. When he would see me, he’d give me a hug, and I could feel him going up behind the collar of my shirt to see what I was wearing. He used to copy me sometimes, but he’d be very honest about it. If he took one of your moves, he’d say, ‘That’s one of yours – I just tried it.’ I didn’t mind sharing things with him, because he would share so much with me – it was a two-way street.”

David Bowie was a voracious reader

While he was mostly known for his musical output, Bowie was a major bookworm who often read a book a day. In 2013, the curators at the Art Gallery of Ontario compiled a list of the artist’s 100 favorite books as part of an exhibition, “David Bowie Is.” It was an eclectic list, encompassing everything from Alfred Döblin’s Berlin Alexanderplatz to Gustave Flaubert’s Madame Bovary to Michael Chabon’s Wonder Boys.