Goldblum’s daily routine is as punishing as his wife’s. He rises at 5am to do 45 minutes of cardio and weight resistance during her parallel work-out.

Jeff Goldblum is married to an Olympic gymnast. At ten, Emilie Livingston moved to Novogorsk near Moscow to train, without her family. (“One thing about the Russians, they have no mercy,” she later said.) At 16, she won the gold medal in rhythmic gymnastics at the Pan American games.

Goldblum’s daily routine is as punishing as his wife’s. He rises at 5am to do 45 minutes of cardio and weight resistance during her parallel work-out: “I’m glad to do it, and I feel not-good if I don’t do it.” He then embarks on what he describes as his “workload of piano”; he’s had a piano in every house he’s lived in and has just released his second jazz album with his band, the Mildred Snitzer Orchestra. As a child he’d forget to practise, and each week, before his lesson, he would hope his teacher had been involved in a car accident. But as an adult,  practising became more pleasurable. “The discipline/freedom part goes like this: putting a little time in, making it a habit in some way, the daily stuff, and that’s how I’ve lived.” The same goes for his acting. Goldblum trained with the New York theatre guru Sanford Meisner, whose techniques focused on the “reality of doing”.

After he finishes piano practice, at 7.30 each morning, Goldblum makes eggs for his two young sons.

At 67, he must be exhausted by the time the day starts. “Well, I go to bed early. The key is, go to bed early. Yes, yes!” he says, plucking at the air with long fingers. He is in bed by 9pm with Netflix. 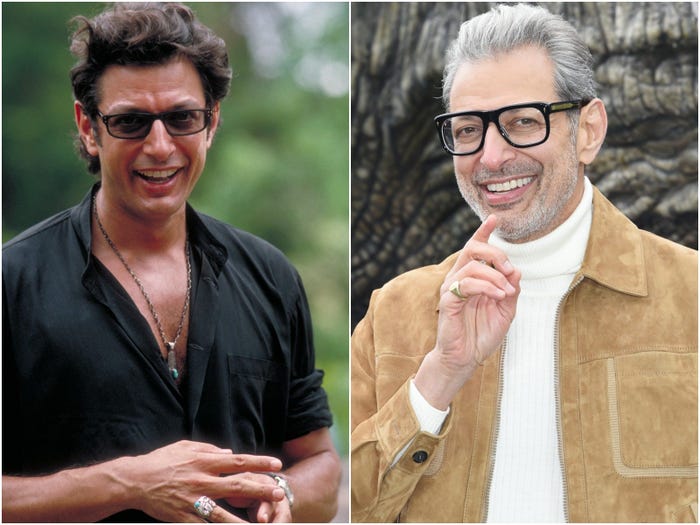 He avoids anything “buzzy”,  according to a GQ article:

I want to eat something that has integrity. I’m constantly seeing how I feel—what seems best for my inner environment and our shared outer environment. I like fruits and vegetables and whole grains and lean protein. I’ve come not to enjoy the stuff I’ve cut out: sugary stuff, fatty stuff, fried stuff. I’m not a big drinker. I don’t like the taste, and it has no appeal to me. In general I avoid things that make me buzzy. I’m plenty buzzy as is.

Having a child helps him stay youtful

I find that having a kid makes you feel younger. Whereas otherwise you might be sitting around at any given moment, now you’re not. You gotta get up and walk him around. I try for 10,000 steps a day on my Fitbit, and sometimes I work out with my son. His name is Charlie Ocean Goldblum, and he was almost 20 pounds at five months, healthy as a horse. I do chest presses with him. I hold him by the rib cage so he’s kind of horizontal, and he goes up and down and up and down. He likes that. He drools on me and laughs, and that’s a thrill. Then I go side to side with him, and I think I’m doing something good for my obliques.

It was a part of those acting classes I took in Pittsburgh. I was in search of the unseen, the theatrical, and the miraculous. I still meditate and do a stretching exercise that I learned through those early experiences.