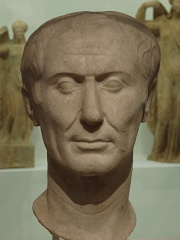 Gaius Julius Caesar (12 July 100 BC – 15 March 44 BC) was a Roman general and statesman who played a critical role in the events that led to the demise of the Roman Republic and the rise of the Roman Empire.

Here is our representation of of typical Roman day, Julius Caesar style.

7:15 AM: Jentaculum (Breakfast), consisting of something small, such as a pancake. Served by wife, maid or slave. Romans typically ate with their hands, but archaeologists have found ancient spoons.

9:00 AM: Arrive. Confer with the Senate about new laws, and polical issues.

11:00 AM: Prandium (Lunch), consisting of a light meal, probably bread and cheese and possibly meat.

4:30 PM: Caesar would probably head to the bath house, to clean up from the long day and exercise. Romans believed that exercise and cleanliness were essential to your health.

5:15 PM: Cena (Supper), the largest meal of the day. Most rich, important people had guests for dinner, and this could last for a long time. Probably served by slaves or servants.