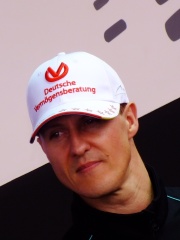 Will Gray wrote for Eurosport that Schumacher, “spent hours in the gym honing himself into a lean, light and strong performance athlete, with a combination of endurance training and core strength exercises.

“In comparison to his peers, he was in a different league and he set the standard for young drivers coming up through the ranks.”

Even at 40 years old, training for a comeback, Schumacher’s dedication in the gym did not wane. According to the Guardian‘s Kate Connolly (via Gulf News), he was training for six hours each day, “improving his physical strength, his reaction time, his coordination and flexibility. … Schumi’s daily routine also involved the regular monitoring of his heart and circulation, through blood tests, MRTs and CTs.”

Although his comeback was not particularly successful, Schumacher won seven championships and 91 grands prix in his career—both all-time records.

Dr Johannes Peil has been at Michael Schumacher’s side for the past nine years. As his personal physician he has accompanied Schumacher for a large part of his career.

When the sportsman sustained serious neck injuries after falling off a motorbike, it was Peil who was charged with the challenging task of bringing him back to full health and later, after he received the offer from Ferrari, to ensure his neck was fit for the purpose of returning to competitive Formula One racing.

The amiable mop-haired doctor who heads a unique sports clinic in Bad Nauheim, a 20-minute drive from Frankfurt airport, said that the 41-year-old’s injuries had been “extreme”.

“It was quite alarming because when they initially checked him out in Spain, they sent him home, saying everything was fine, but we carried out a diagnosis as soon as he came to us, and we soon realised how serious his injuries were.

Only later was the focus on his return to Formula One, following the accident involving Felipe Massa.

“Schumacher’s recovery programme focused first and foremost on intensive physiotherapy sessions and he underwent three to four hours of physio every year in the first few months.”

Schumacher trained up to six hours a day, and spent much of his time at Bad Nauheim. The sports training concentrated on improving his physical strength, his reaction time, his coordination and flexibility.

“The key is to try out how for an individual all these elements are best fitted together in a training programme, and once you’ve worked it out, it’s very exciting,” said Peil, who counts among his patients, other top sportsmen and women, such as the British Olympic decathlete, Daley Thompson and the British Olympic dressage rider Laura Bechtolsheimer.

Schumi’s daily routine also involved the regular monitoring of his heart and circulation, through blood tests, MRTs and CTs.