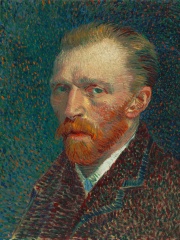 Vincent Willem van Gogh (30 March 1853 – 29 July 1890) was a Dutch post-impressionist painter who is among the most famous and influential figures in the history of Western art.

In just over a decade he created about 2,100 artworks, including around 860 oil paintings, most of them in the last two years of his life.

“Today again from seven o’clock in the morning till six in the evening I worked without stirring excepting to take some food a step or two away,” van Gogh wrote in an 1888 letter to his brother, Theo, adding, “I have no thought of fatigue, I shall do another picture this very night, and I shall bring it off.” This seems to have been typical for the artist; when in the grip of creative inspiration, van Gogh painted nonstop, “in a dumb fury of work,” barely pausing to eat. And when his friend and fellow painter Paul Gauguin came to visit a few months later, van Gogh’s habits scarcely changed. He wrote to Theo, “Our days pass in working, working all the time, in the evening we are dead beat and go off to the cafe, and after that, early to bed! Such is our life.”