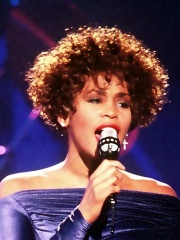 Here are some of the things that Whitney Houston reportedly loved to eat during her time in the spotlight.

Who doesn’t love a piping hot bowl of the stuff?

One source noted that Whitney Houston had tomato soup on her tour menu during a December 2009 show at Moscow’s Olympiisky Arena. The source also speculated that the “I Will Always Love You” singer was sober during her Moscow performance. She allegedly abstained from drinking too. But shockingly, grilled cheese bites weren’t included on her tour menu.

2. Sweet and Sour Chicken and Shrimp

Houston was all about that red sauce.

Apparently, the legendary singer loved all types of Chinese food. But one of the people who accompanied Whitney Houston on tour noted that sweet and sour Asian dishes were Houston faves. In particular, the singer really enjoyed shrimp and chicken doused in the signature sweet and sour dressing, especially if the food was in her dressing room before or after a show.

Whitney Houston kept it real when it came to food.

And she didn’t seem to scoff at red meat like some other Hollywood figures. In fact, the singer reportedly ordered a hamburger with a side of fries right before her untimely passing in February of 2010. Houston requested the meal through her hotel’s room service. According to the evidence, she was able to finish the burger before the night’s fatal events transpired.

4. Turkey Sandwiches and Jalapenos
She seemed to like some meals spicy.

Whitney Houston also ordered another meal from room service on the ill-fated night of her passing. She got a turkey sandwich decked out with jalapeños. It seemed as if the singer liked turkey sammies so much that she took hers with her to the bathroom. Unfortunately, though, Houston didn’t finish her jalapeño snack before it was too late.

In fact, Whitney Houston reportedly ate a whole lot of sushi and tempura during her 1990 “Feels So Right” tour in Japan. And why shouldn’t she? The Asian country is known for its impeccable seafood and raw cuisines. People even claim that Houston really went to town on some of Japan’s most notable dishes in between sets during the 14-date music tour.

Everyone has to have a favorite cereal, even Whitney Houston.

The singer didn’t like the super healthy stuff, either. In fact, she preferred the really sugary kinds — like Fruity Pebbles. During an interview with Newsweek, Houston even admitted to craving the multi-colored cereal crisps during her pregnancy with Bobbi Kristina Brown between 1992 and 1993. We certainly understand that food craving.

One source noted that Whitney Houston’s mother, Grammy-award-winning singer Cissy Houston, made candied yams every year during the holiday season. Apparently, the dessert-like dish was a beloved family favorite. No one in the family ever forgot Cissy’s brown sugar and butter recipe either.

We’re not sure which version she liked best.

It doesn’t really matter whether Whitney Houston preferred peanut M&Ms or the regular milk chocolate kind, though. She just had good taste, overall. In fact, she apparently requested M&Ms in addition to a few other candies while performing music throughout Southeast Asia. Houston liked her dressing room to stay stocked with sweets.

9. Peanut Butter and Jelly
Whitney Houston did have a jelly preference, though.

The singer liked when peanut butter and jelly were readily available. During music tours, Houston had an extra special request. All of her PB&J sandwiches absolutely had to have Welch’s grape jelly. Nothing off-brand or strawberry flavored for this pop star. She could very likely taste the difference.

10. Raisinets
She also made sure to have plenty of Raisinets on hand.

It’s safe to say Whitney Houston had a bit of a sweet tooth. To satisfy her cravings, she had to have Raisinets on hand. Many people eat these chocolate-dipped treats at the movies, but Houston liked to enjoy during touring dates.

She did eat some healthy stuff.

Whitney Houston was born in New Jersey in 1963. According to a 2012 article penned by Bob Karp, Jersey locals remembered the singer’s favorite meals all too well. The Randolph Diner owner Bobby Spiropoulos said Houston would visit his business all the time and devour a Greek Salad with chicken whenever the craving struck.

You read that right.

Whitney Houston indulged in this comfort food more than once. In fact, she allegedly frequented the New Jersey Black Horse Tavern and Pub and often ordered the creamy dish. According to the restaurant manager Michael Horty, Houston liked to sit and eat with her daughter Bobbi Kristina in the booth located right behind the host station.

13. Honey Catfish
She shared this dish with her former husband.

Bobby Brown reportedly made his ex-wife, Whitney Houston, honey catfish on occasion. Perhaps he showed affection through food. During a 1999 interview with Redbook, Houston noted that the sweet and savory dish was one of her favorites, claiming “[Bobby] makes a honey catfish that is so good… He will take chicken and rice and corn and green beans and just put them all in one pot and stir it up with the gravy. I am telling you something — it’s delicious.”

14. Shrimp Cocktail
We can’t blame her for this one.

It’s obvious Whitney Houston had a thing for seafood. Reportedly, she loved to have shrimp cocktails on tour. The dish was easy to eat, and it didn’t require a lot of cleanup. It was perfect for her busy lifestyle and performance schedule. No wonder she requested shrimp cocktail by name.