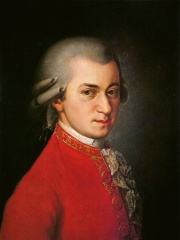 Mozart felt the most creative in the mornings, which is why as soon as he rises and shines at 6am he would whip out his dream journal and subsequently write one (1) symphony as well as his nightly visions. After this, he screams at his canary. His canary screams back. Somewhere, as a reaction to this interaction, his dog barks.

At about 9am he would feel the need to move around a bit after “finishing his toilet” (as he wrote in a letter to his father), so he would meander his grounds followed by his pet starling (who was mimicking one of Mozart’s works when he was adopted by the composer). As soon as breakfast was ready, he would dress and sit at the table with his wife, Constanze, and their child Jeirome who was guzzling barley water. Here is what Mozart enjoyed to eat for breakfast:

After breakfast, he would complete whatever menial tasks that day called upon from him. This may or may not include teaching music, hanging out with fellow Freemasons, corresponding with rich people paying him to write music, or sending servants out to the market with gobs of cash to come back with more streusel (and possibly a new frock). Occasionally, he will have to endure the tiring speeches of his mother-in-law.

At around 3pm, he would eat dinner. Some sort of schnitzel (again) and probably some liver dumplings. Maybe a little sauerkraut, if the bounty was plentiful.

At 8pm, he would begin playing the clavier. Sometimes, he would also write music for a couple hours at night. However, this was mostly a morning activity, when his creativity was ripe. The clavier playing would continue for around 5 hours until he then went to sleep at 1am. At this time, he would rinse his face once, observe his rapid hair loss (he was severely deficient in vitamin D), kiss his wife goodnight and repeat the process the next day.

He describes his days at the Weber house:

I am writing this at eleven at night, because I have no other leisure time. We cannot very well rise before eight o’clock, for in our rooms (on the ground-floor) it is not light till half-past eight. I then dress quickly; at ten o’clock I sit down to compose till twelve or half-past twelve, when I go to Wendling’s, where I generally write till half-past one; we then dine. At three o’clock I go to the Mainzer Hof (an hotel) to a Dutch officer, to give him lessons in galanterie playing and thorough bass, for which, if I mistake not, he gives me four ducats for twelve lessons. At four o’clock I go home to teach the daughter of the house. We never begin till half past four, as we wait for lights. At six o’clock I go to Cannabich’s to instruct Madlle. Rose. I stay to supper there, when we converse and sometimes play; I then invariably take a book out of my pocket and read…

But as he struggled to reconcile the growing demands of his evolving career and with those of his romance with Constanze, the third Weber daughter, his daily routine changed considerably. In a letter to his sister penned in 1782, a few months before he married his beloved, Mozart outlines a routine so intense that it left him a mere five hours of night’s sleep:

At six o’clock in the morning I have my hair dressed, and have finished my toilet by seven o’clock. I write till nine. From nine to one I give lessons. I then dine, unless I am invited out, when dinner is usually at two o’clock, sometimes at three, as it was to-day, and will be to-morrow at Countess Zichi’s and Countess Thun’s. I cannot begin to work before five or six o’clock in the evening, and I am often prevented doing so by some concert; otherwise I write till nine o’clock. I then go to my dear Constanze, though our pleasure in meeting is frequently embittered by the unkind speeches of her mother, which I will explain to my father in my next letter. Thence comes my wish to liberate and rescue her as soon as possible. At half-past ten or eleven I go home, but this depends on the mother’s humor, or on my patience in bearing it. Owing to the number of concerts, and also the uncertainty whether I may not be summoned to one place or another, I cannot rely on my evening writing, so it is my custom (especially when I come home early) to write for a time before going to bed. I often sit up writing till one, and rise again at six.