6 AM I wake up and brush my teeth—that’s the most important thing for me to do first.

7 AM Time for my first workout of the day—I always work out twice a day.

9 AM First Instagram of the day is posted. No one else has these Maison Margiela and Balenciaga kicks yet, so I’ve got to show them off.

9:15 AM My first meeting of the day is going over my designs for my collection of men’s undergarments and T-shirts, FRIGO Crown. I am excited to see everyone’s thoughts on the designs. Next I have to go over photos from a photoshoot I just did for the line.

10:30 AM Quick trip to the studio to work on my next album, Street King Immortal. At the end of the day it is all about the music, and I want this next album to be perfection.

1 PM Cover photoshoot. This is why I have to stick with my training schedule: there were a lot of shirtless photos taken. Watch out, ladies.

3 PM Time for an hour of phone interviews to promote Power, Spy and Southpaw. I love chatting with journalists from all over the world and seeing their views on all of my projects.

3:30 PM My favorite part of the day is FaceTiming with my two-year-old son Sire, who lives in L.A.

4 PM My trainer doesn’t mess around, so now I’m heading back to the gym for my next workout.

5:30 PM Power just hit, [on June 6th] so we’re making sure that everything is the very best.

7 PM I attend a fitting for two upcoming photoshoots with Jake Gyllenhaal for Southpaw. I like to be very hands on with what I am wearing.

8 PM I’ll usually have a quick dinner at the office in between meetings, but if I do go out, Il Mulino is my favorite restaurant. Maybe I shouldn’t tell people that though—I don’t want them taking my reservation!

11:30 PM Quick visit to the club [Manhattan’s Gilded Lily] to make sure the Effen Vodka is flowing tonight. I can’t help myself: when I see the mic, I just need to hop on the stage for a few songs.

TBD Bedtime for me varies every day, but it’s usually very late and I sleep very little—around three to four hours every night. It takes a lot for my mind to turn off for the night! 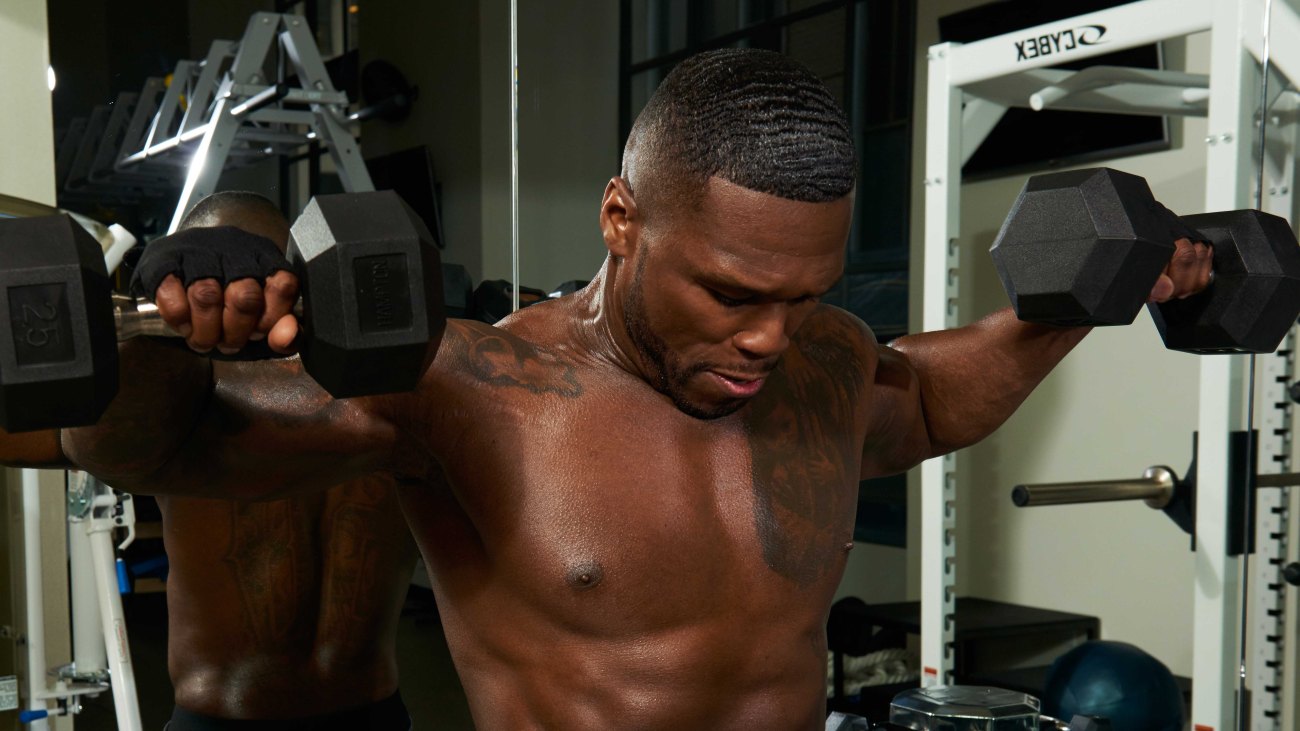 Despite his transformation over the past 20 years, Jackson has maintained the same, relentless work ethic and focus on his physical and mental wellbeing. “In order to truly be in the position to hustle your hardest day in and day out, it’s not enough to only avoid booze and weed,” he wrote in Hustle Harder, Hustle Smarter. “You also, especially as you grow older, need to proactively try to preserve your body.”

In 2015, 50 Cent spoke to The Cut and broke down his typical morning routine:

50 CENT ON WORKING OUT, BEING WELL, AND EATING CHEESE | THE CUT

Similar to The Rock’s daily routine, Jackson’s gym routine not only provides him with physical benefits, but also gives him uninterrupted space in the day for clear thinking. “When I work out, I feel better. Everything about me — my spirits — is just in a different space,” he told The Cut. “Because I do it before work hours, it gives me a chance to think about everything that’s in front of me for the day.”

On his specific training routine at the gym, Jackson wrote in his book:

Most days I’ll do a session with my trainer that might include non-weigh work like pushups and pull-ups, jumping rope, sledgehammer swings, and hitting a heavy bag. Then once my training session is over, I’ll stick around the gym and hit some weights on my own. My go-to routine is lifting light weights with very short breaks for rest between sets. That helps me get toned and get a cardio workout at the same time. If I’m preparing for a film role where I have to look really cut, then I’ll also work with heavier weights to add bulk. If I’m trying to lose weight for a role or photo shoot, I’ll incorporate running into my routine. Generally I try to go between three and four miles per run.

For his diet, Jackson prefers to avoid carbs and processed food, focusing on eating whole foods and vegetables. He broke down a typical meal plan in his book, “I’m not really a breakfast guy, so just a smoothie or protein shake of some sort will do. For lunch, it’s usually a salad. If I’m eating out for dinner, which is hard to avoid for me, I’ll order something like a chicken and lettuce wrap or a steak with asparagus.”

Unlike many rappers, Jackson is famous for being a non-drinker and non-smoker; preferring to stay clear-minded for business opportunities. Even when he’s partying at a club or hosting a party, he has a strategy for staying off the alcohol.

“First I’ll pour drinks from a bottle of Champagne for everyone who is in VIP with me. When the bottle is empty, I’ll give it to one of my guys and have him quietly refill it with ginger ale,” he wrote. “For the rest of the night I’ll have that bottle in my hand. I’ll take swigs every now and then just to keep the vibe right, but I’m not drinking anything but Canada Dry.”

Jackson admits that, when it comes to his sleep, there’s still improvements to be made. Earlier in his life, Jackson was motivated that his lack of sleep meant that he was out working while his competitors were sleeping. Nas’ legendary no-sleep lyrics (“I never sleep, ’cause sleep is the cousin of death”) certainly didn’t help.

But as he got older and saw successful people like Amazon founder Jeff Bezos, former Google CEO Eric Schmidt and Facebook COO Sheryl Sandberg all prioritise sleep, he switched his mentality. These days, he uses Sunday mornings to sleep for up to 9 hours to refresh his body.

One aspect of my lifestyle where I know I need to improve is getting as much sleep as possible. When I’m locked in on a project, I do become that robot. I can go eighteen hours straight and barely feel fatigue. I love knowing that I’m outworking my competition, but I also realize that I need to find a way to make sleep a bigger priority.

The following is an example of what a typical workout looks like for 50 Cent. It was designed by 50’s long-time trainer and M&F adviser, Jay Cardiello (cardiellofitness.com). “One of the biggest things for him is he needs to be able to run around with a microphone and perform for two-plus hours,” Cardiello says. “I don’t think most people realize how draining that is.” To build cardiovascular endurance while continuing to build the shape 50 wants, Cardiello uses a lot of supersets; for example, 10 pushups after every set of bench press.

Sometimes, cardio activities like heavy bag work or battling ropes can play a bigger role than weights in 50 Cent’s workout. “It needs to be very adaptable,” says Cardiello. “In some of the cities where he tours overseas, there might not be a gym, or it’s just a treadmill. Whatever he’s got, he finds a way to make it work.”

After two chest supersets to start his workout, 50 gives his pecs a break by working other parts of his body, but by the end of the workout, he’s back at it with four sets of 15 dips. When 50’s hotel gym is lack-ing, trainer Jay Cardiello says 50 will get creative. “He’ll do pushups with his hands on pillows.”

To work his core from all angles, 50 raises his legs for an equal number of reps on each side, on top of doing reps straight down the middle. When he starts to fail, he does knee raises rather than just ending the set.

On any standing upper-body exercise, control is especially key. Bracing your abs before a move like a lateral raise, as 50 is doing here, doesn’t just protect your spine, it also gives your abs some extra work and will help make your six-pack pop.