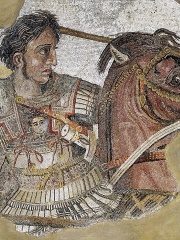 Plutarch wrote: “In his diet, also, he was most temperate, as appears, omitting many other circumstances, by what he said to Ada, whom he adopted, with the title of mother, and afterwards created Queen of Caria. For when she, out of kindness, sent him every day many curious dishes and sweetmeats, and would have furnished him with some cooks and pastry-men, who were thought to have great skill, he told her he wanted none of them, his preceptor, Leonidas, having already given him the best, which were a night march to prepare for breakfast, and a moderate breakfast to create an appetite for supper. Leonidas also, he added, used to open and search the furniture of his chamber and his wardrobe, to see if his mother had left him anything that was delicate or superfluous. He was much less addicted to wine than was generally believed; that which gave people occasion to think so of him was, that when he had nothing else to do, he loved to sit long and talk, rather than drink, and over every cup hold a long conversation. [Source: Plutarch (A.D. 45-127), “Life of Alexander”, A.D. 75 translated by John Dryden, 1906, MIT, Online Library of Liberty, oll.libertyfund.org ]

“For when his affairs called upon him, he would not be detained, as other generals often were, either by wine, or sleep, nuptial solemnities, spectacles, or any other diversion whatsoever; a convincing argument of which is, that in the short time he lived, he accomplished so many and so great actions. When he was free from employment, after he was up, and had sacrificed to the gods he used to sit down to breakfast, and then spend the rest of the day in hunting, or writing memoirs, giving decisions on some military questions, or reading. In marches that required no great haste, he would practise shooting as he went along, or to mount a chariot and alight from it in full speed. Sometimes, for sport’s sake, as his journals tell us, he would hunt foxes and go fowling. When he came in for the evening, after he had bathed and was anointed, he would call for his bakers and chief cooks, to know if they had his dinner ready.

“He never cared to dine till it was pretty late and beginning to be dark, and was wonderfully circumspect at meals that every one who sat with him should be served alike and with proper attention: and his love of talking, as was said before, made him delight to sit long at his wine. And then, though otherwise no prince’s conversation was ever so agreeable, he would fall into a temper of ostentation and soldierly boasting, which gave his flatterers a great advantage to ride him, and made his better friends very uneasy. For though they thought it too base to strive who should flatter him most, yet they found it hazardous not to do it; so that between the shame and the danger, they were in a great strait how to behave themselves. After such an entertainment, he was wont to bathe, and then perhaps he would sleep till noon, and sometimes all day long. He was so very temperate in his eating, that when any rare fish or fruits were sent him, he would distribute them among his friends, and often reserve nothing for himself. His table, however, was always magnificent, the expense of it still increasing with his good fortune, till it amounted to ten thousand drachmas a day, to which sum he limited it, and beyond this he would suffer none to lay out in any entertainment where he himself was the guest.”