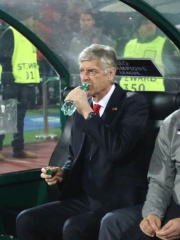 “I read a lot, do a lot of different sports, daily, so that occupies me.” he said.

“I run 8-10 km a day. I travelled a lot. I did a lot of game observation, charity, many conferences on football, on management, on motivation, on the meaning of life.”

“I personally don’t know what it means. I am always under stress a little bit but what was good is I don’t have to get up or if I have an interesting lunch I don’t have to leave because I have a commitment. I discovered that freedom of time in front of you. It is a good feeling.”

The Frenchman was snapped on a beach holiday in Qatar. And Twitter was here for it.

A noticeably ripped Wenger received a barrage of support from starstruck fans.

“Almost 3x my age and still in better shape than I’ve ever been,” user @Patrick_JW wrote. “Wenger more fit at 70 than me at 25,” another wrote.

Others were in disbelief, questioning whether the photos were real, but given there a multiple shots doing the rounds, we have it on good authority that they’re 100 per cent legit.