Bernard Sanders (born September 8, 1941) is an American politician who has served as the junior United States senator from Vermont since 2007 and as U.S. Representative for the state’s at-large congressional district from 1991 to 2007. 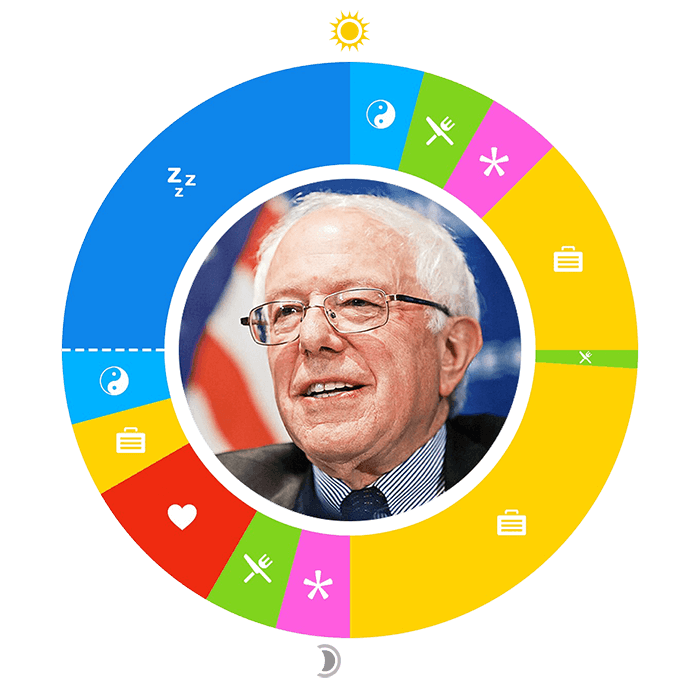 According to his daughter, Sanders was “paleo before paleo was a thing.” The democratic candidate subsists mostly on meat and vegetables. He enjoys scrambled eggs for breakfast and likes working the grill at dinnertime. We can’t tell for certain, but chances are Sanders’ diet isn’t too restrictive: Last month, we saw him taste his eponymous Ben & Jerry’s ice cream flavor on “The View.” For the record, he seemed to like it.

Sanders is not your average sedentary American. He’s old-fashioned in the sense that he chops his own wood and does his own grocery shopping, which makes it seem that he’s engaged in physical activity more often than the lot of us. In high school, young Sanders was a track star. According to his medical records, he’s in “very good health” and consumes alcohol “infrequently.”

Sanders sleep routine is seemingly kept undercover(s). What we do know is that he doesn’t hit the snooze button, which is a good habit to stick with for the sake of productivity.

Most reporters describe Bernie as “harried” and largely impatient, anxious and frenetic at work. His workplace since the early days contains scattered yellow legal pads full of notes, scribbles and thoughts.

In contrast to Clinton’s band of 300+ staffers, and true to Sanders’ minimalist, frugal roots, his campaign team is incredibly lean. Sanders’ assumes responsibilities usually delegated to others such as: campaign finance director, pollster, social media specialist, direct mail writer… Sanders’ will even collect boarding passes and lead his staff through the airport.

Family is Where the Heart Is

Three things help Bernie relax: family (specifically his seven grandchildren), music and nature. When questioned why he made the move from New York to Vermont, he points to his love for the countryside:

When I was a kid growing up in Brooklyn, we lived in a lower-middle-class neighborhood in an apartment. I went to Boy Scout camp for three or four years. And going into the country was transformational for me. I remember on one occasion when I came back, I was crying, getting back into the city.

His house is covered with play toys, from pink, plastic kitchenette sets to wiffle balls and bats. His favorite thing to do with his grandkids is teach them chess, baseball and soccer. It’s also how he gets his rare bits of exercise nowadays. Another favorite is chasing the youngest around playing “Monster”.

Long walks with his wife is another favorite way to decompress, even when it’s cold outside they’ll make the effort.

According to his family, Bernie has two major splurges: a large swing-set in the backyard for the grandchildren, and a top-of-the-line car stereo. Bernie’s love for music predates his solo folk album, and his iPad is full of Beethoven, the Supremes, Temptations, Abba, Bee Gees, Celine Dion and country music.