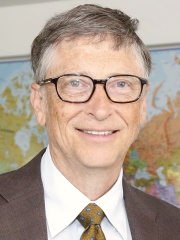 William Henry Gates III (born October 28, 1955) is an American business magnate, software developer, and philanthropist. He is best known as the co-founder of Microsoft Corporation.

In a 2018 self-reflection blog post about what he learned at work that year, Bill Gates wrote:

Today of course I still assess the quality of my work. But I also ask myself a whole other set of questions about my life. Did I devote enough time to my family? Did I learn enough new things? Did I develop new friendships and deepen old ones? These would have been laughable to me when I was 25, but as I get older, they are much more meaningful.

WHAT I LEARNED AT WORK THIS YEAR | GATES NOTES

As the years have gone by, Gates has gone from regularly pulling all-nighters while building Microsoft to understanding, and advocating, the importance of sleep. “Once or twice, I stayed up two nights in a row. I knew I wasn’t as sharp when I was operating mostly on caffeine and adrenaline, but I was obsessed with my work, and I felt that sleeping a lot was lazy,” he wrote on his blog. Today, Gates regularly gets at least seven hours of sleep per night.

Upon waking up, how does one of the world’s richest people spend his day? Although Bill Gates’ daily routine can be widely varied, there are certain rituals and habits that he sticks to every day.

In an article by Andrew Ross Sorkin for the New York Times, Gates would start his day in his private gym, where he would spend an hour working out on the treadmill. During this time, he would watch DVDs from the Teaching Company’s “Great Courses” series.

Then, during an hour on the treadmill, Gates, a self-described nerd, would pass the time by watching DVDs from the Teaching Company’s “Great Courses” series. On some mornings, he would learn about geology or meteorology; on others, it would be oceanography or U.S. history.

Following his exercise session, Gates would catch up on the latest headlines from around the world by reading the New York Times, The Wall Street Journal and The Economist, telling Fox Business that it was “great to have something to read on a regular basis”. He is particularly interested in topics related to public health policy, sharing his thoughts on his blog and via Twitter.

According to The Telegraph, Gates follows a very similar routine to Elon Musk, breaking down his daily schedule into five-minute intervals. In order to keep track of his plans and ideas, he regularly jots down notes and ideas.

Every day Gates sets aside a set amount of time to read a book, with the businessman claiming that he reads around fifty books a year. He often recommends some of his favourite titles he has read recently on his blog. Upheaval by Jared Diamond, Nine Pints by Rose George and A Gentleman in Moscow by Amor Towles, were just a few of his favourite picks for 2019.

Away from exercise, work and reading, he likes to spend as much time as possible with his three children, often touring unusual locations with his son according to an interview with Quartz Magazine. On weekends, one of his favourite pastimes is to play the card game Bridge.

In an interview with The Cut, Melinda Gates revealed their typical evening routine after a work day:

Bill and our daughter Phoebe and I try to have dinner as often as we can together, usually around 6 p.m., sometimes as late as 7 p.m. Dinner is usually a mix of whatever Phoebe and Bill and I like — anything from Mexican food to Asian to steak dinners or fish. I try not to work after dinner — that was kind of a mantra I made for myself about four years ago. I’ll often read, talk with Bill, and then, generally, I’ll watch something relaxing before bedtime with Bill or Phoebe.

To unwind at the end of a busy day, one of Gates’ preferred options is to do some household chores, telling the readers of his Reddit AMA session that he finds washing the dishes quite enjoyable and a way to destress from the day, “other people do volunteer, but I like the way that I do it”.

Before going to bed, he will typically read for an hour before ensuring he gets seven hours of sleep each night. Speaking to the Seattle Times, he said, “Even though it’s fun to stay up all night, if I have to be creative I need seven hours. I can give a speech without much sleep, I can do parts of my job that way, but in thinking creatively, I’m not much good without seven hours.”

Despite his busy schedule, Gates allots one hour each day on deliberate learning. He’s known to read about 50 books a year. A book can also help him see something familiar from a different angle, thereby expanding his worldview. So, what’s the lesson here? Well, as Benjamin Franklin said, “An investment in knowledge pays the best interest.” Even if it’s not an hour, do dedicate a portion of your time to learning.