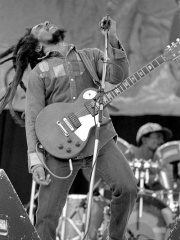 Robert Nesta Marley, OM (6 February 1945 – 11 May 1981) was a Jamaican singer, songwriter, and musician. Considered one of the pioneers of reggae, his musical career was marked by fusing elements of reggae, ska, and rocksteady, as well as his distinctive vocal and songwriting style.

He lived for most of his performing years in a communal house on Hope Road in Kingston, Jamaica, where the band members and assorted hangers-on adhered to the rules of the Rastafarian religion. In this excerpt from his new book, “Catch a Fire: The Life of Bob Marley,” Timothy White describes, in the island vernacular, the rituals at the house on Hope Road.

The routine was always the same; everybody would try to get up in the morning before Bob, but no one ever did. Some would attempt to outlast him the night before, but that never worked, either. It was uncanny; Bob was always the last to take to his little mattress in his upstairs bedroom (bare except for a portrait of Haile Selassie hanging on the wall) and the first to awake. If everybody passed out around 3 a.m., Bob was asleep at 3:15; if one of the dreads lasted until first light, Bob did too. If Bob had to miss his sleep entirely to maintain the upper hand, he did and seemed none the worse for wear.

Regardless of the previous night’s activities (which always centered on smoking herb, singing songs and discussing Selassie), Bob, fellow Wailers Bunny Livingston and Peter Tosh, Jamaican soccer star Alan (Skilly) Cole and the rest of the brethren would be ready at sunrise for a jog, usually on the sprawling Jamaica House grounds near the police officers’ club or at the field site of the Water Commission near Hope Road. But this was merely an “open-yeyes” sprint. If Bob was in the mood “fe discipline in stamina,” then everybody would follow as he led the way along Hope Road and down Mountain View Avenue onto Windward Road, heading in the direction of the airport. At the traffic circle, the group would hook a right, and move out, running abreast along the Palisadoes peninsula, for as long as anyone could stand it.

On Sundays, the jogging entourage might go the whole 18-odd miles to Port Royal Point, their lengthening locks dancing in the wind. If they hadn’t arranged for a car to pick them up, they’d hike back and pile into Bob’s car for a drive to Bull Bay, where they’d wash themselves in the Cane River Falls, scrubbing each other’s locks, and then position themselves in the roaring falls so that the torrents pounded against their chests and backs. Next they’d ride to Papine Market, and Rasta cook Gilly would select the day’s produce: calaloo, pop-chow (a Chinese vegetable akin to Swiss chard), okra, yams, mangoes, citrus, bananas, plantains, gungo peas, rice, sweet potatoes, guava, pawpaw (papaya), cassava, breadfruit, ackee, arrowroot, avocado. Gilly would also purchase some snapper, kingfish, goatfish and doctor fish. For juices, Bob himself would choose the carrots, soursop and Irish moss, a type of seaweed used for making a sweet, gelatinous drink believed to encourage the libido. Everything would be stuffed into the car and taken back to Hope Raod, where Gilly would prepare for a communal “ninyam” (meal). If they were feeling “ninyam-surrey” (hungrey enough to devour the whole county of Surrey), he’d prepare an ital (pure, healthful) feast, the consumption of which would take up most of the rest of the day.

If the band wasn’t recording or rehearsing, everyone just milled around the Hope Road complex until Bob organized the afternoon soccer game. If there weren’t enough breddahs on hand for two full teams, the game took place informally on the front lawn at Hope Road. Bob played inside right and was a strong darter and dribbler who preferred passing over shooting; he left the scoring to Alan, whom he idolized.

His sickness and eventual death from cancer at the age of 36 (36!) that started in his toe.

The illness was discovered after a soccer injury but, untreated, spread to his lungs and brain over the years. One doctor claims he had never seen so much cancer in a living person before. In his final months, either knowing the end was inevitable or casting his fate with the Jah of his Rastafarian religion, he found solace in a simple daily routine of a smoking a spliff, studying the Bible, and playing music.