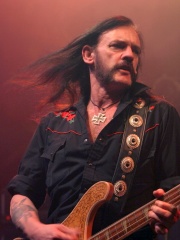 Lemmy boasted about drinking a bottle of Jack Daniel’s every single day.

Kilmister was on a daily dose of JD-and-Coke, speed and cigarettes for over 40 years. Leading up to his recent death, his manager said he’d cut down on his vices but was still drinking about two bottles of wine a day. But hey, at least he ate food – kind of. No vegetables, bar potatoes and green beans. Cold spaghetti, cold chips, cold steak. There are nutrients in there somewhere.

“While eating healthy doesn’t counteract the effect of the drugs, it is going to help you recover more quickly and effectively. In Lemmy’s case, he’s not eating well,” say the guys at Volteface. “In terms of what speed is going to do for his mental health, amphetamine psychosis is a well-known condition that people who consume amphetamines long-term can suffer from, especially if you consume large amounts. That’s going to be a significant worry if you’re consuming speed every day. With the Jack-and-Coke, that’s a lot of sugar that he’s putting in. But just as how his chief concern probably isn’t eating his five a day, he’s probably not desperately concerned about the amount of sugar – until obviously he contracted diabetes and it became more of a worry.”