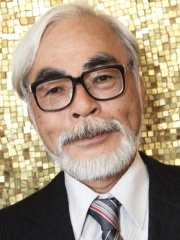 He rises at 6 a.m. each morning for exercise and coffee, and arrives at Studio Ghibli by 9 a.m. — often working Saturdays and holidays, too. “I usually postpone the lunch break, because when you eat lunch, you get sleepy and tired,” Miyazaki explained. “I eat at around 3 p.m., and then I take a break. And I have a promise with my wife to leave the studio at 9 p.m.”

Miyazaki needs all that time because he draws his film’s initial storyboards entirely himself, entirely by hand, an unheard of workload for an animated feature, which is usually a highly collaborative creative endeavor. “He’s probably the only auteur working in animation,” said Unkrich. “Every frame of those films are the way they are because he wanted them that way.” That’s not just a platitude. After passing along his storyboards to his animation team so they can flesh them out into fully animated sequences, Miyazaki reviews their work, and if he can’t communicate his changes verbally, “I re-draw their drawing,” he said.

With The Wind Rises, Miyazaki chose to complicate his process even further by adopting a realistic aesthetic, similar more to a live-action film than the whimsical fantasias of his previous features. While Miyazaki had toyed with doing a film this way in the past, he said his longtime producing partner Toshio Suzuki finally convinced him to actually go through with it. “I told him that if we create such a film, that would be like digging the tomb of Studio Ghibli,” said Miyazaki. “We were starting to create something that was the opposite of what we had been creating.” He laughed. “There were a couple of animators working for me through the production who mentioned they don’t understanding what they’re creating. Of course, they didn’t tell that to me directly, but I knew what they were thinking by seeing them working.” (Miyazaki later noted with a laugh — he laughed a great deal — that he’s been told by several people who had seen The Wind Rises that he resembles the character of Mr. Kurokawa, the hard-charging director of an aeronautical engineering firm who marches past the desks of his firm’s designers and engineers, barking out orders.)

As their work literally piled up, stacked sometimes past the heads of his animators, Miyazaki and his team fell so behind that he was unable to personally review each and every drawing. “I didn’t have enough energy to correct everything,” he said. “When I look at the movie, and I see those scenes, I try to look at the corner so I don’t look at anything. Of course, I know how to correct those scenes, but we don’t have enough time and energy. There are a lot of directors who don’t even look at those drawings, don’t correct them. But, of course, I am an animator. I can only express myself by drawing.”