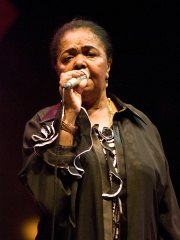 She spent much of her time touring, performing for foreign audiences in regions as remote as Siberia. Yet she always returned home to her native Cape Verde.

“You won’t see gold or diamonds or anything like that,” Évora says through a translator. “But you will see the pure, tropical beauty: wonderful weather, gorgeous beaches, and just wonderful and warm people.”

Évora began her professional career at the age of 16, singing in a Cape Verdean ensemble that was otherwise all-male. “They actually told me that I had a good voice, that my voice was very pleasant,” she said. “And from that moment on, I didn’t stop.”

Her album Rogamar translates roughly as “prayer for the sea.” Évora rhapsodizes about the ever-present Atlantic Ocean surrounding Cape Verde. Ironically, she never set foot in the water.

“True, I do not go in the water only because I don’t know how to swim,” she said. “I never took the time to learn, but I appreciate [the sea]. I was afraid of the waves.