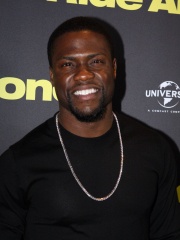 On a typical day, Hart is up at between 5-5.30am. “I have a snooze button. I’m a five or six times snoozer. I set my alarms 3 minutes apart,” he told The Huffington Post. Breakfast is usually egg whites and turkey bacon. Hart prefers drinking tea rather than coffee, because he says it’s better for your voice, but on long days he’ll drink the latter.

After that, it’s off to his workout — the number one priority in Hart’s schedule outside of his family. It doesn’t matter whether it’s 6am on a Wednesday or on a Saturday, Hart will most likely be at the gym hanging from a pull-up bar and working through a set of elevated crunches or going on a run if his schedule doesn’t permit a gym session.

“I put a large demand on my body. You know, 14, 15 hours a day consistently. If I’m not taking care of myself, there’s no way that I can do that at a high level. It’s impossible,” Hart told The Undefeated, explaining why he’s put so much emphasis on working out every day.

For me, my busy schedule starts with the workout and me working on me. After that, it’s making sure you prioritize your family and time with them and from a schedule perspective, realizing that you only have one of you. You don’t have clones or doubles. Don’t run yourself into the ground and to the point of no return, but, of course, there’s a high level of hard work that has to go in to get the things that you want.

The comedian’s relentless work hustle nearly came all to an end on September 1, 2019 when Hart was involved in a car accident when the 1970 Plymouth Barracuda, that he was a passenger in, went off Mulholland Highway and rolled down an embankment.

Both vehicle occupants suffered major injuries to their back and were taken to the hospital. Hart recounted to Men’s Health a few months later that the doctors told him, “if those fractures had been a quarter centimeter in one direction, he would’ve been paralyzed.”

In the hospital, Hart had time to reflect on his life, work, family and priorities. “It all boiled down to four walls. And in the space of those four walls was my wife and my brother, my kids and my friends, all on rotation,” he remembers. “And I got a chance to think about what matters, and it’s not fame. It’s not money. It’s not jewelry, cars, or watches. What matters are relationships. You know, the people that were helping me get up and out of the bed.”

Once Hart was out of the hospital, fully recovered and rehabbed, he focused on getting back to where he was physically before the car accident. It didn’t take long at all. “His physical progress wasn’t surprising, because Kevin was in tremendous shape before the accident,” Johnson said. “His body composition and muscle memory are working in his favor.”

Hart’s also back on his relentless hustle, but this time around, he’s thinking about balancing it with the things that really matter in his life. “I’m addicted to the fucking work,” he admitted. “I’d much rather that be my addiction than be strung out on crack, but now I have to struggle to find balance. That hustle is not going anywhere, but I want it suppressed and balanced so I can put the same kind of energy into my family.”

Since recalibrating his priorities after the accident, Hart is focused on getting as much quality family time as possible — something he admits he was previously neglecting. “Honestly, there’s a lot that I wasn’t doing,” he says. “Now I’m doing a lot of little things that are important. I’m sitting with the kids before and after dinner. We are doing taco Tuesdays, Mexican-food Thursdays, Chinese-food Sundays. We got movie night twice a week. Now I’m walking my fucking dog. I’m picking up dog shit.”

Find the balance and find a nice place of comfort where you can do that at a high level and also still get your rest and still show up and give 100 percent. I don’t think that’s something you ever want to compromise because a beat-up you and a ragged version of you isn’t good to nobody because you’re never able to give a great representation of what you are and who you are.