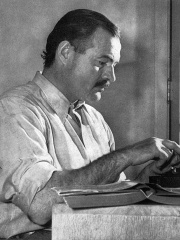 Ernest Miller Hemingway (July 21, 1899 – July 2, 1961) was an American novelist, short-story writer, journalist, and sportsman. His economical and understated style—which he termed the iceberg theory—had a strong influence on 20th-century fiction, while his adventurous lifestyle and his public image brought him admiration from later generations.

In an interview with George Plimpton, Hemingway revealed his daily routine…

When I am working on a book or a story I write every morning as soon after first light as possible. There is no one to disturb you and it is cool or cold and you come to your work and warm as you write. You read what you have written and, as you always stop when you know what is going to happen next, you go on from there.

You write until you come to a place where you still have your juice and know what will happen next and you stop and try to live through until the next day when you hit it again. You have started at six in the morning, say, and may go on until noon or be through before that.

On how Hemingway composed his work, Currey writes:

He wrote standing up, facing a chest-high bookshelf with a typewriter on the top, and on top of that a wooden reading board. First drafts were composed in pencil on onionskin typewriter paper laid slantwise across the board; when the work was going well, Hemingway would remove the board and shift to the typewriter. He tracked his daily word output on a chart — “so as not to kid myself,” he said. When the writing wasn’t going well, he would often knock off the fiction and answer letters, which gave him a welcome break from “the awful responsibility of writing” — or, as he sometimes called it, “the responsibility of awful writing.”