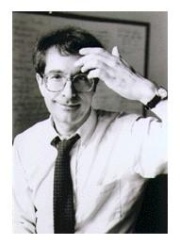 From an interview with the Harvard Gazette:

GAZETTE: What were your impressions when you first came to Harvard, in 1961?

GARDNER: When I came to Harvard College, I met plenty of people who knew more than I did. In everything I did, including playing the piano, there were people better than I was, and that was good. You shouldn’t think that because you are a big fish in Scranton, that’s going to happen indefinitely. But what I remember is that, in my very first week at Harvard, I stood on the steps of Widener Library and I felt the whole world was open to me. Harvard gave me chances to pursue my curiosity, my appetite for new knowledge. And I guess — I’ve never put it this way before — I didn’t think that there was anything holding me back. That’s a wonderful feeling.

GAZETTE: What courses had a big influence on you?

GARDNER: I may have audited more courses than anyone in the history of Harvard College! I took or audited all kinds of courses, but I followed my own path. I wanted to show that I could do medicine or law.

I thought I’d become a history major. I took history courses during my freshman year. As a 19-year-old, I was fascinated by the Crusades and the Industrial Revolution, but I didn’t care about how historians wrote about it. And so when the history tutorial in sophomore year was focused on historiography, I got cold feet.

I was also interested in psychology. I had a very insightful teacher who said to me, “You seem to be interested in psychology and sociology; you should major in social relations.” Nobody below a certain age knows what the field of “social relations” is, but it was a major, a concentration — a combination of sociology, anthropology, and psychology. It was developed at Harvard after World War II, and the founders of that field were still alive and teaching when I was a freshman. It didn’t have much prestige, in part because it was seen as an easy major.

At first I thought I’d study clinical psychology as a graduate student, but I went to England on a fellowship and before I had packed my bags, by chance I met Jerome Bruner, a renowned and charismatic psychologist. I became interested in cognitive psychology. Bruner also introduced me to my future wife, Judy Krieger, who was coming to graduate school as a psychologist. On our honeymoon, in June 1966, we went to Geneva to meet Jean Piaget, the Swiss psychologist. By that time, I wanted to do cognitive developmental psychology in the Piaget-Bruner tradition.

GAZETTE: Tell me more about your studies and your research, and how they led you to become interested in the human mind.

GARDNER: I took an unusual career path. Shortly after I commenced graduate studies in developmental psychology, I began to work as a research assistant at Project Zero, a just-launched research organization in education created by a brilliant philosopher, Nelson Goodman. While at Project Zero, I began to do studies of children’s artistic development. Piaget had focused on the development of scientific thinking, and so I decided instead to focus on the development of artistic thinking, doing studies with kids and the arts. Thus were combined my interests in human development and my interests in music and other art forms.

After receiving a doctorate in developmental psychology, I got a post-doctoral fellowship to work at the Boston Veterans Administration Hospital, where I saw brain-damaged patients. I was inspired by a great teacher, Norman Geschwind, a neurologist who said we could learn about the mind from studying brain damage.

And so, every day, almost by chance, I’d be working at the VA with brain-damaged patients in the morning, and in the afternoon I’d be doing studies with kids at Project Zero. This was a really transformative experience. Seeing dozens of brain-damaged patients, I realized that the notion of intellect being one thing didn’t make any sense. The first thing that strikes you about brain damage is that it is quite selective. Some patients had lost their language abilities but they were very musical or vice versa. I also worked with kids, and some of them were good in writing, others were good in drawing, and some others in dancing or painting. And people can be very good in music but they can’t write a coherent sentence — or vice versa.

All these experiences chipped away at the notion of intelligence as being one, singular, even though I never thought about it explicitly. And then the dean of the Harvard Graduate School of Education asked me to co-direct a “project on human potential.” I had already outlined my third book, directed at the general reader, called “Kinds of Minds.” I was going to write about the different kinds of minds that I observed at the VA hospital and in my encounters with children. (By then, Judy and I had three of our own: Kerith, Jay, and Andrew.)