Although there are no accounts of a normal day in John Lennon’s life, the description of his final day gives us an insight into one of the days’ in his life.

10AM It is an unusually warm and sunny pre-Christmas day in New York. John’s usual morning routine is to have coffee at Café La Fortuna near his home on New York’s Upper West Side. But on Mondays the cafe is closed, so he leaves the family apartment in the Dakota Building around 10am, to get his hair cut in a Fifties Teddy Boy style at a nearby barbershop.

11AM Photographer Annie Leibovitz and her assistant arrive at the Dakota for a photoshoot for Rolling Stone magazine. John tells Leibovitz that he knows Rolling Stone wants him on the cover by himself but it is important to him to pose with Yoko.

The photograph Leibovitz takes of a naked Lennon entwined around Yoko in black, like a child clinging to its mother, is to become iconic. John tells the photographer: ‘You’ve captured our relationship exactly.’

11.45AM Amateur photographer Paul Goresh arrives at the Dakota. Goresh is one of a small group of devoted fans who frequently hang around outside John’s home and whom John has got to know and trust. Also waiting is a stranger – 25- year-old Mark Chapman.

As Goresh recalls: ‘When I got to the Dakota, the only other person there was a guy standing with a long overcoat with a fur collar and a fur hat. He had a scarf on and he was holding John’s album Double Fantasy and he says to me, “Are you waiting for Lennon?”

‘And I said, “Yeah.” He said, “My name’s Mark, I’m from Hawaii.” I said, “I’m Paul, I’m from New Jersey.” ‘He asked, “Do you work for him?” I said, “No.” He told me, “I came all the way from Hawaii to get my album signed.” So I said, “Where are you staying while you’re in the city?” And with that he seemed to change his whole demeanour from like a dope to an aggressive person. And he said, “Why do you want to know?” And I told him, “Go back where you were standing and leave me alone.” ‘

Yesterday and today: Mark Chapman’s 1980 mugshot, above left, and another taken this year. He has been repeatedly denied parole, and will have the opportunity to apply again in 2012

12.40PM A team from RKO Radio in San Francisco, headed by Dave Sholin, arrive at the Dakota to interview Lennon.

‘We drive up to the Dakota, which is a very impressive building,’ says Sholin today. ‘It takes your breath away. And then we were ushered into this incredible space, this beautiful room where you take your shoes off, which is a wonderful custom, sit down on a couch, and Yoko was there. And I looked up at the ceiling and I saw these beautiful clouds that were painted on it.

‘Then the door opens and John appears and does this little jump up in the air and says, “Well, here I am, folks, the show’s ready to begin.”

‘He spreads his arms out and comes over. It was like he wanted to make us feel very comfortable and it worked, because in a matter of two or three minutes we were conversing as if I’d known him for years. It was just that kind of chemistry and it was tremendous. In the three-and-a-half hours we were together, he could not have been more upbeat, more excited about what lay ahead – both musically and with Yoko and Sean.’

1.30PM Sean Lennon and his nanny, Helen Seaman, plus Sean’s bodyguard, return home after spending the weekend on Long Island.

3.30PM Goresh goes into the Dakota to find out if John has signed a copy of his book A Spaniard In The Works, which Goresh has left for him.

‘When I went back to my post outside, the guy with the overcoat was there and he was alone, again on the other side of the archway,’ says Goresh.

‘He came over and said, “I owe you an apology for the way I acted earlier. But you’re in New York. You never know who you can trust these days.” ‘

3.55PM John concludes his interview with Sholin, saying: ‘I consider that my work won’t be finished until I’m dead and buried and I hope that’s a long, long time.’ 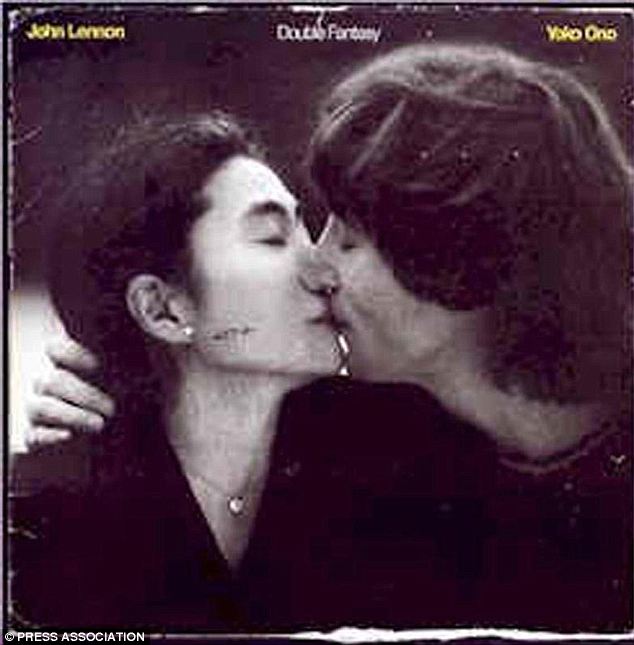 Double Fantasy: Lennon’s last studio album. It was this album cover that he signed for Chapman out the front of the Dakota building. It shows a quickly scrawled signature and the year

4PM As the RKO radio crew wait outside the Dakota for their limo, John and Yoko come out looking for their car to take them to the Record Plant recording studio in Midtown to work on a new song. Sholin says: ‘John was looking around and for a split second, I’m thinking, “Well, this is pretty amazing – here is John Lennon outside in New York.” I just dismissed it. In this town, I thought, it’s no big deal and that was it.’ 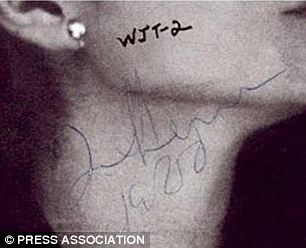 Goresh adds: ‘John said to me, “Don’t forget to get your book.” And as he was talking to me, the guy with the overcoat approached him from the left. And the guy didn’t say a word, he just held the album out in front of John and John turned to him and looked at the album and said, “Do you want it signed?” And the guy nodded. He didn’t say a word.

‘It looked like a picture, so I snapped a couple of frames and the first picture I took was John signing the album. And the guy nodded and he took the album and he just backed away. And then John turned to me and looked at me as if to say, “That was peculiar.”‘

Meanwhile, there is still no sign of John’s taxi. Says Sholin: ‘So John is saying, “Well, our car isn’t here. You’re going to the airport, would you mind giving us a ride?” I said, “Hop on in.” And on the way, I ask him about his relationship with Paul McCartney. [Lennon and McCartney had supposedly been estranged since The Beatles’ breakup in 1971 and had traded insults on their respective solo albums].

And we said our goodbyes and dropped John and Yoko off at the studio.’

5PM John and Yoko arrive at the Record Plant to continue work with record producer Jack Douglas on Yoko’s Walking On Thin Ice, which is to be their next single. The lyrics are a ‘spoken word poem’ by Yoko which, like the song’s title, will turn out to have a eerie significance. They are about John and Yoko and how they will be remembered after their deaths. John loves it and tells her over the studio talkback system: ‘I think you’ve just got your first number one, Yoko.’

The last music John ever records is the guitar work on this track.

‘John was really on top of the world,’ recalls Douglas. ‘We finished the mix that night and I walked him down to the elevator and I said, “I’ll see you at Sterling,” the mastering house, at 9am. And he was all smiles. He had a cassette of the song with him. And Yoko was all smiles. And the elevator door closed.’

10.30PM In the car, Yoko proposes going to the Stage Deli for something to eat before they go home. But John says he wants to go back to the Dakota to see Sean before he goes to sleep.

The December night is exceptionally mild. Instead of driving through the arch into the safety of the Dakota’s inner courtyard, the limo draws up at the kerb. 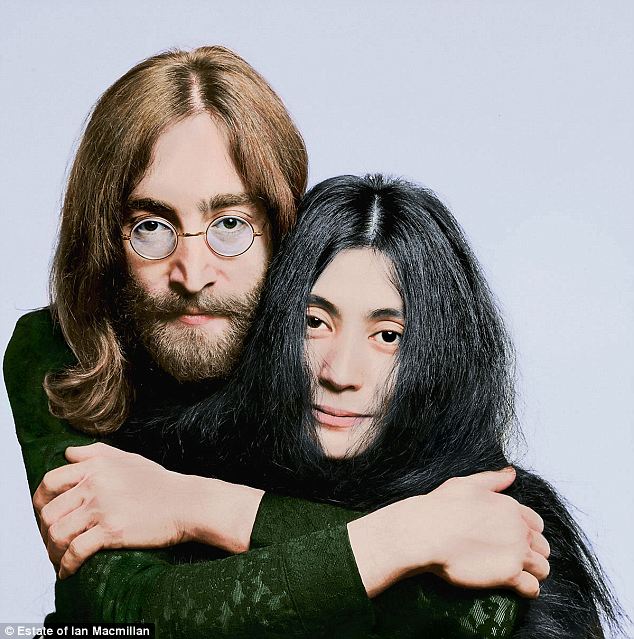 John and Yoko: Ono is still angry that a man who became an icon for peace was killed so violently. She has made her wish clear that Chapman never be released

10.45PM As John gets out of the car, Chapman comes forward, still clutching his autographed copy of Double Fantasy. He softly calls out ‘Mr Lennon’, produces a .38 handgun and, dropping down into a combat stance, fires five shots, four of which hit John. John keeps walking, goes up the stairs into the porter’s vestibule, then collapses, scattering the cassettes he’s been carrying.

A few seconds later, Yoko bursts in screaming: ‘John’s been shot.’ The duty porter, Jay Hastings, rings the alarm that goes through to the police, then kneels beside John to try to administer a tourniquet. This being futile, he removes John’s glasses and covers him with his porter’s jacket.

10.50PM Police patrolman Steve Spiro gets a call in his radio car to say there has been a shooting at 1 West 72nd Street. He and his partner, Peter Collin, get there in less than a minute.

‘There was a man pointing into the vestibule and he said, “That’s the man doing the shooting,” ‘ says Spiro. ‘We realised this is for real. I peeked in and saw a man with his hands up, so I threw this guy against the wall and at that point the porter says to me, “He shot John Lennon.” And I said, “You what?”

‘I saw two of my fellow police officers carrying a man out, face up with blood coming out of his mouth. I recognised John Lennon.’

10.53PM Patrolmen Bill Gamble and James Moran put John in the back of their car and speed to Roosevelt Hospital at 59th Street near Central Park. Yoko follows behind in another police car.

11PM Emergency Room doctor Stephan Lynn has left for the night, but the hospital calls him back. ‘I actually got there before the patient,’ recalls Dr Lynn. ‘I didn’t know exactly what was happening. Through the doors, two police officers came in. They were carrying a body over their shoulders. It was lifeless. We were ready.’

Also in the ER, after a motorcycle accident earlier that evening, was a young ABC newsman called Alan Weiss, for whom the events of that night are an indelible memory.

He recalls: ‘The doctor said, “I’m going to take you into X-ray and see what the damage is.” At that moment, the door behind me slams open and a man comes running in yelling, “We’ve got a gunshot, gunshot in the chest.” And the doctor says, “When’s it coming in?” He says, “Hitting the door right now.”

‘She says, “Alan, I’m sorry, I’ve got to take care of this.” I reply, “No problem, I understand.” And I can hear footsteps and the door opens up and I look behind me and in come I’m not sure quite how many police officers carrying a stretcher.’

Dr Lynn continues: ‘We positioned the body in front of us on a stretcher in the resuscitation room. It was clear that there were three gunshot wounds in the left upper chest and one to the left arm. It was also clear that there was no circulation, no profusion.

‘We initially didn’t know that it was John Lennon. As part of our normal routine we took his identification out of his clothing and it said John Lennon but the nurses said, “This doesn’t look like John Lennon, it can’t be.”