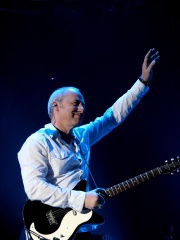 Mark Freuder Knopfler OBE (born 12 August 1949) is a British singer-songwriter, guitarist, and record producer. He became known as the lead guitarist, singer and songwriter of the rock band Dire Straits.

Knopfler never made a secret of appreciating peace and quiet. The headbands he used to wear on stage not only kept the sweat out of his eyes; when he took them off after the show, nobody would recognize him anymore. While many superstars spent the 1980s more time in detox than in the studio, he stayed away from excesses and scandals.

In 2006 in London, Knopfler opened British Grove, a recording studio where he records his own albums, and which is also used by the likes of Eric Clapton, Duffy, the Rolling Stones and various orchestras. Mark Knopfler lives a secluded life in London with his third wife and their two daughters. He is a slow person, he says of himself; he takes his time walking, thinking, reacting, and he avoids stress.

“Everyone knows that I’m only touring because I want to be,” Mark says. “I want to tour, not because I have to. So it’s great. It’s a great position to be in. I can do it the way I want to do it, which makes me feel very lucky.”

His life is now dedicated to family, writing, touring and, of course, recording. “I try and look after myself – go for a walk, go to the gym – but other than that, if it’s a day off, I get some work done. Whether or not it comes to anything, that’s another matter. But I don’t worry about that, I just get up and go and do something else.”