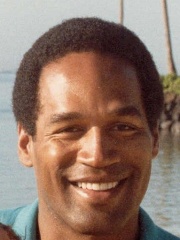 After 25 years living under the shadow of one of the nation’s most notorious murder cases, OJ Simpson says his life has entered a phase he calls the ‘no negative zone.’

Simpson says he is healthy and happy living in Las Vegas.

For a man who once lived for the spotlight, Simpson has been keeping a largely low profile since his release from prison in October 2017 after serving nine years for a robbery-kidnapping conviction in Las Vegas.

His time in the city hasn’t been without controversy, however. A month after his release an outing to a steakhouse and lounge at the Cosmopolitan resort off the Las Vegas Strip ended in a dispute. Simpson was ordered off the property and prohibited from returning.

No such problems have occurred since, and Simpson is among the most sought-after figures in town for selfies with those who encounter him at restaurants or athletic events he attends occasionally.

He plays golf almost every day and said he is a member of a club of ‘retired guys’ who compete with each other on the golf course.

Simpson said he remains close to his children and other relatives. His parole officer has given him permission to take short trips including to Florida where his two younger children, Justin and Sydney, have built careers in real estate.