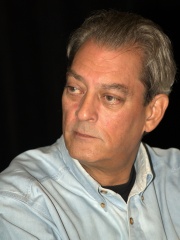 I don’t know why I write. If I knew the answer, I probably wouldn’t have to. But it is a compulsion. You don’t choose it, it chooses you. And I wouldn’t recommend it to anybody.

THE RUMPUS INTERVIEW WITH PAUL AUSTER – THE RUMPUS.NET

Known best for his New York-centred novels, Auster, who originally hails from Newark, New Jersey, has lived in Brooklyn for 30 years, and currently resides there with his wife, novelist and essayist, Siri Hustvedt.

“Siri and I have been together for 30 years and have shared our work with each other from the very beginning,” Auster said. “As I write my books I’m reading them out loud, carrying pages home, eagerly awaiting her comments. She’s brilliant. I don’t think there’s a comment she’s made that I haven’t taken to heart over those years. Conversely, I read everything she writes, in her finished draft.”

When he is working on a novel, Auster tends to “stick to a rigid routine,” waking up between 7-8am to have his orange juice and tea, and to read the newspaper. At about 9am, the writer will walk three blocks down to another apartment he owns in the same neighbourhood and begin his writing day.

It’s very Spartan here, nothing to do but work. I spend as much time as I can writing each day, which usually means from 9:30 a.m. to 4:30 p.m.—basically a 9-5 schedule. Some days one has more stamina, you’re more on fire, it’s a marathon so you have to pace yourself.

As part of his creative process, Auster always starts working on his novels by writing in longhand in notebooks. “I’ve always written by hand,” he told The Paris Review in 2003. “Mostly with a fountain pen, but sometimes with a pencil—especially for corrections.”

“If I could write directly on a typewriter or a computer, I would do it. But keyboards have always intimidated me. I’ve never been able to think clearly with my fingers in that position. A pen is a much more primitive instrument. You feel that the words are coming out of your body and then you dig the words into the page. Writing has always had that tactile quality for me. It’s a physical experience.”

Auster is fond of his Olympia 1961 typewriter, so much so that he wrote an entire book, The Story of My Typewriter, as a tribute to the machine. He also believes that working on a typewriter prevents him from being a lazy writer “because the typewriter forces me to start all over again once I’m finished. With a computer, you make your changes on the screen and then you print out a clean copy. With a typewriter, you can’t get a clean manuscript unless you start again from scratch.”

Auster’s most recent novel, 4 3 2 1, published in 2017 to coincide with his 70th birthday, was the author’s first book in seven years — the longest timespan in between his books. With over 800 pages, 4 3 2 1 is more than double the size of anything he’s written before. To finish the novel, Auster worked “seven days a week for three years, finishing each day too exhausted to do anything but collapse in front of the television,” according to an Esquire profile.

Every day it’s the same. It’s very boring to someone on the outside but inside you are full of thought and ideas. It’s very exciting for me. Writing is very hard, it’s very hard to write a good sentence. It doesn’t come easy. But the difficulty is part of the pleasure. So I wouldn’t say writing is fun, I don’t enjoy it the way I enjoy certain other things but I feel more alive when I’m doing it.

PAUL AUSTER TO KATHIMERINI: TIME IS RUNNING OUT, BUT I’M HAPPY | EKATHIMERINI.COM

JONATHAN LETHEM: What were you doing today before I appeared in your house?

PAUL AUSTER: The usual. I got up in the morning. I read the paper. I drank a pot of tea. And then I went over to the little apartment I have in the neighborhood and worked for about six hours. After that, I had to do some business. My mother died two years ago, and there was one last thing to take care of concerning her estate—a kind of insurance bond I had to sign off on. So, I went to a notary public to have the papers stamped, then mailed them to the lawyer. I came back home. I read my daughter’s final report card. And then I went upstairs and paid a lot of bills. A typical day, I suppose. A mix of working on the book and dealing with a lot of boring, practical stuff.

PA: I’ve found that writing novels is an all-absorbing experience—both physical and mental—and I have to do it every day in order to keep the rhythm, to keep myself focused on what I’m doing. Even Sunday, if possible. If there’s no family thing happening that day, I’ll at least work in the morning. Whenever I travel, I get thrown off completely. If I’m gone for two weeks, it takes me a good week to get back into the rhythm of what I was doing before.

JL: I like the word “physical.” I have the same fetish for continuity. I don’t really ask of myself a given word or page count or number of hours. To work every day, that’s my only fetish. And there is a physical quality to it when a novel is thriving. It has an athletic component. You’re keeping a streak going.

PA: Writing is physical for me. I always have the sense that the words are coming out of my body, not just my mind. I write in longhand, and the pen is scratching the words onto the page. I can even hear the words being written. So much of the effort that goes into writing prose for me is about making sentences that capture the music that I’m hearing in my head. It takes a lot of work, writing, writing, and rewriting to get the music exactly the way you want it to be. That music is a physical force. Not only do you write books physically, but you read books physically as well. There’s something about the rhythms of language that correspond to the rhythms of our own bodies. An attentive reader is finding meanings in the book that can’t be articulated, finding them in his or her body. I think this is what so many people don’t understand about fiction. Poetry is supposed to be musical. But people don’t understand prose. They’re so used to reading journalism—clunky, functional sentences that convey factual information—facts, more than just the surfaces of things.