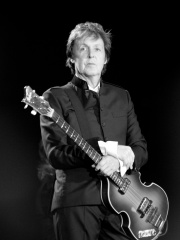 Nimble as a ballerina, with the skin of a particularly soft baby thanks to his wife’s moisturiser, Sir Paul McCartney is 72 going on 27.

He’s a father of five and grandfather of eight and has five decades in the business behind him. But this icon of rock royalty feels as fit and healthy as ever.

As well as dumping the dope he famously smoked for years, he has also adopted a punishing daily gym regime.

And so it is that a pair of denim-clad legs and a Beatle bottom are wobbling precariously before me.

One of the planet’s most famous men is demonstrating his headstand technique – “my secret claim to fame” – in the backstage dressing room before his triumphant homecoming show in Liverpool.

It is quite possibly the most surreal moment of my career. Like Macca circa 1967, I think I might even be hallucinating.

“I feel pretty fit,” he says, still upside down with his back towards me. “I’m not the sort of person who particularly needs a trainer. I’ll just watch what the trainers do and then copy them.

“I do a bit of the cross-trainer, a bit of running, a bit of cardio and then I do some weights, some abs on the Swiss ball, before ending up on the mat doing a few stretches. And then standing on my head.

“That’s my big claim to fame! I ­actually learned it in the 60s, it was a yoga thing, and my argument is I need flexibility not strength.

“But what’s cool about it is that I’ll be in the gym with all these guys doing really big weights, whilst I’m there doing not big weights, and afterwards, when I’ve done my headstand for about five minutes, these big guys will come up to me and say, ‘That was pretty impressive, man!”

As if to prove his point, Paul starts flailing his legs around in a variety of splits movements.

“After about three minutes I start doing this”, he says before effortlessly returning to the ground, and rejoining me on the sofa in his Japanese-themed dressing room.

As he munches on a handful of dried fruit and nuts, I don’t quite know where to go from here. I am literally speechless.

A famously staunch vegetarian, he is an excellent ambassador for clean-living and, in the words of one of his crew, he “has more energy than anyone I have ever met”.

While the Rolling Stones, U2 and Coldplay average 25 songs per gig, on Macca’s current Out There tour, about to sweep across Europe and America, he performs an astonishing 38 songs over the course of nearly three hours.

Described by one reviewer as a “Duracell bunny”, he was on invincible form during his incredible sell-out concert on Thursday night .

Though he once used so much cannabis he was locked up for 35 years ago, those days are long gone.

“I don’t do it any more,” he explains. “Why? The truth is I don’t really want to set an example to my kids and grandkids. It’s now a parent thing.

“Back then I was just some guy around London having a ball, and the kids were little so I’d just try and keep it out of their faces.

“Instead of smoking a spliff I’ll now have a glass of red wine or a nice margarita. The last time I smoked was a long time ago.”

First introduced to smoking weed by Bob Dylan in August 1964, Macca later claimed the drug got him “thinking for the first time, really thinking” and helped his songwriting.

A few years later Paul and the other Beatles – John Lennon, George Harrison and Ringo Starr – had all tried LSD and then, while stunned by the sudden death of their manager Brian Epstein, they got involved with Maharishi Mahesh Yogi, also known as the “giggling guru”.

The band travelled to India to join their new spiritual adviser and though they parted with Maharashi on bad terms, they do credit their stay at his ashram in Rishikesh with weaning them off LSD and inspiring scores of new songs.

In 1980, Paul was imprisoned for nine days after he was found with half a pound of cannabis trying to enter Japan – the only time he ever spent more than a week apart from his late wife Linda.

After thousands of protests from fans and numerous visits from his lawyers he was eventually released without charge.

While a stint in jail is undoubtedly a fairly humbling ordeal, Paul is one of the few stars who does not need taking down a peg or two.

Despite his fame, success and wealth (£710 million at the last count), he remains remarkably sane. And, well, nice.

When I congratulate him on “not being a tosser” (the word just slips out) he laughs.

“That’s quite a recommendation,” he says. “I might put it on my CV”.

It is also telling that the majority of his 300-strong crew on his current, record-smashing tour have been with him for more than 30 years.

Sir Paul McCartney is one of the good guys.

An independently wealthy New York-born businesswoman, she has no desire at all to be in the public eye.

“Nancy is great at keeping me grounded because she’s very level-headed,” he says.

“When we met I wondered how she’d react to it all.

“She got some great offers to do stuff in magazines for just being who she was – Mrs McCartney – and stuff that a lot of other girls would be like, ‘Woah, I’ve gotta do that!’

“But she said no. She’s the head of a trucking company and she basically said, ‘No, I’ve already got a job’.

“And when we went to event where there were a lot of paparazzi, she would just hold back a bit and shove me forward.”

He adds: “Nancy’s got a low profile and wants to be able to walk around unnoticed. She’s sensible, and it’s refreshing. She is very grounding.

“Who wears the trousers in in our house? We both do. Oh go on, then… she does!”

Indeed, he also has Nancy to thank for his fresh-faced appearance.

When I ask if he moisturises (because OF COURSE this is what you ask a Beatle) he sheepishly confesses to borrowing her creams.

“Nancy’s got some stuff so yeah, I do moisturise now,” he smiles.

“I do it thinking it is completely poofy, but she assures me that men do it now.”

Unlike many of his internationally famous contemporaries, Paul also stays grounded by ditching his security guards and going cycling by himself.

He also describes his Liverpudlian family as “wiser than any president or prime minister I have ever met.”

He adds: “I do get recognised but if I’m just going for a quiet little country walk, I might meet a bird watcher or two but they’re not going to bother me.

“They are far more interested in the peregrine falcon.

“I have quite a lot of family and when I was growing up it was in a real, good, ordinary family – you couldn’t really get away with anything.

“A lot of people can’t be bothered going back to their home towns, but I really value it.

“If you’re lucky and come from a good family, then that’s how you learn. You do just think, ‘OK, I won’t be a complete tosser.’”

The 21-time Grammy winner, who takes a language lesson in every country he visits so he can address the crowd in their native tongue, has picked up an eclectic group of friends along the way.

Among them are fellow Scouser Cilla Black, and Sir Cliff Richard, who rose to huge fame in the late 1950s a few years before the Beatles.

So what does he make of Cliff’s recent troubles which have seen him publicly investigated over allegations of a historical sex offence.

He says: “The last time I saw Cliff was when we were in Nashville.

“It’s really down to whether it’s true or not – but because I don’t know whether it is or not, I’ll give him the benefit of the doubt.

“He’s always seemed like a really cool guy to me, a nice guy.”

And on the subject of nice guys, Sir Paul would know – he does, after all, manage it standing on his head.