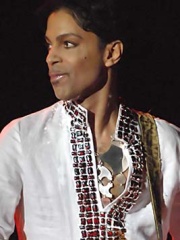 Prince generally ate pretty healthily. According to Ray and Juell Roberts, the married couple who worked as his personal chefs for the last three years of his life, his favorite foods included minestrone soup, veggie wraps, lentils, chickpeas, dark greens, smoothies and juices. However, he also had a prodigious sweet tooth. Ray recalled that he always had a dessert on hand, like cakes, cookies, or chocolate mousse. Sometimes that would be Prince’s entire dinner.

Before Prince hired the Roberts, he had another personal chef, Margaret Wetzler, who had barely graduated from culinary school when she took the job. She said that although her employer mostly ate well, he might also suddenly want a milkshake. One of his most bizarre requests came at 11 p.m. One night, he asked her to bring him a birthday cake. Instead of breaking out the mixer, she bought one at a store!

Birthday cake at 11 p.m. almost counted as an afternoon snack for Prince. He even kept time differently than the rest of the world. His friend, political activist Van Jones, recalled:

This, of course, meant that his mealtimes were also on a different schedule. Wetzler recalled that the first time she cooked for Prince was for a party that started at midnight. And when she got the job, the singer’s personal assistants told her, “You have to be on call 24-7. Oh and by the way – he’s nocturnal.” Wetzler usually got a call around 3 or 4 p.m. According to the menu served at Paisley Park today, one of Prince’s favorite 4 a.m. snacks was a vegan peanut butter Rice Krispies bar coated in milk chocolate. That sounds worth staying up for.

Despite Prince’s well-documented love of dessert, candy, and all things sweet, some people swore that they never even saw him eat. A journalist who worked with him in the ’90s, Heather McElhatton, said:

He could shoot for two days straight, without getting tired, it seems… I never saw him eat, like physically eat, anything in 10 years.

The people who may know better than anyone else just how much Prince could put away are his personal chefs. However, they disagree slightly. Wetzler noted that at her tryout, the man ate everything and asked for seconds. However, Ray Roberts said that sometimes Prince only ate very small bites of his favorite desserts.

Ray Roberts said that he and Juell received a long list of foods that Prince didn’t like. Onions, mushrooms, and feta cheese stood out on the list. Roberts did admit, though, that he often finessed onions into the dishes, chopping them very finely to avoid detection.

Figuring out what Prince liked and didn’t like could sometimes feel like playing a puzzle game. For instance, Ray explained that instead of saying he didn’t want to eat any more red peppers, Prince would just leave the red peppers on the side of his plate. Sometimes he wrote notes in a very hard-to-decipher handwriting. But he could be direct if he wanted to. Wetzler said Prince only ever returned one dish, a bowl of soup that she knew she made wrong. Apparently, “He carried his full bowl back into the kitchen, put it on the counter and simply said, ‘No.’” That’s the worst kind of burn.

Prince’s passion for pancakes was cemented in a sketch by comedian Dave Chapelle in 2003. It was based on an apparently true story. Supposedly, Prince invited Charlie Murphy and his brother Eddie (yes, that Eddie) to his mansion, beat them at basketball, then served them pancakes. Prince seemingly found Chappelle’s portrayal so funny that he put a picture from it on his 2013 single “Breakfast Can Wait.”

To mark the song’s release, on October 19, 2013, Prince threw a 2 a.m. concert and named it The Breakfast Experience Pajama Dance Party. For a $50 donation, guests could spend the night at the breakfast-lover’s Minnesota mansion Paisley Park. They wore pajamas, listened to Prince and his band, 3rdEyeGirl. Of course, they ate pancakes.

Although vegans like to claim Prince as one of their own, he was actually a vegetarian. His estate, Paisley Park, is still pescetarian. And Mayte Garcia said that their wedding dinner consisted of vegetarian food decorated with edible flowers. This detail is important when you consider one of his favorite treat foods – cheesy pasta. Prince’s personal chefs Ray and Juell Roberts said that although the musician didn’t eat cheese very often, when he did, he liked it on pasta.

And Garcia recalls that while she was a dancer on Prince’s Diamond and Pearls tour, he would work up an appetite on stage and then eat fettuccine alfredo — while standing up.

Another pasta dish Prince enjoyed was only made a little bit weird by the drink he chose to go with it. William Blinn, who was hired by Warner Bros. to write Purple Rain, recalled that he first met the musician and his manager Steve Fargnoli at an Italian restaurant. Prince ordered “spaghetti with tomato sauce and orange juice to drink.” Blinn said that Prince’s food choice made him realize the musician was one of a kind.

How does Prince stay in shape?

When I was working with him in 1991, he played a lot of basketball. He was also a healthy eater – there were no soda machines at Paisley Park – only juice machines. Absolutely no drugs etc. Once we ate some leftover food his cook sent to us – chicken, mashed potatoes, and asparagus.