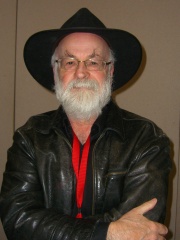 I certainly don’t sit down and plan a book out before I write it. There’s a phrase I use called “The Valley Full of Clouds.” Writing a novel is as if you are going off on a journey across a valley. The valley is full of mist, but you can see the top of a tree here and the top of another tree over there. And with any luck you can see the other side of the valley. But you cannot see down into the mist. Nevertheless, you head for the first tree.

1. You don’t need a map, but a destination helps

Some writers plan everything in advance and then write around their structure, while others explore their story in the writing then hammer it into shape once they have enough to work with. Of course, these are the extremes of a spectrum, but it’s safe to say that Pratchett falls firmly into the latter camp.

I just let it run, because you can always rewrite, check things, find the right way to say things. If you sit and plan, you get stuck in the planning. When you’re writing a book, I find my fingers just start doing it.

The approach that works for you will depend on your natural style, but Pratchett suggests that even those authors who don’t plan ahead might still have use for a few waypoints.

‘The Valley Full of Clouds’ is a great image, but what exactly is Pratchett talking about in terms of practical waypoints? Elsewhere, Pratchett elaborates that he begins with details he wants to include in the story – for instance, that he wants to explore goblin culture – and sets out with that in mind. As for the ‘other side of the valley,’ Pratchett is happy to begin writing with an ending in mind… it’s just not an ending he necessarily intends to keep.

If necessary, I will write the ending fairly early on in the process. Now that ending may not turn out to be the real ending by the time that I have finished. But I will write down now what I think the conclusion of the book is going to be. It’s all a technique, not to get over writer’s block, but to get 15,000 or 20,000 words of text under my belt. When you’ve got that text down, then you can work on it. Then you start giving yourself ideas.

Terry Pratchett describes his approach to story planning as a journey though ‘The Valley Full of Clouds.’ You can’t see the path you’re going to take, but you know enough to head for the first tree…CLICK TO TWEET

As an important addendum to his approach, Pratchett explains that his initial drafts are strictly for his eyes only. This is excellent advice to follow, whether you plan ahead or not – when you first create art, the urge to find an immediate audience can be strong, but try to resist. Great writing takes editing, and if you share something that isn’t quite ready, it’s easy to take a lukewarm response to heart and lose faith in a project.

I’m about 10,000 words into my next book… This is what I call draft zero. This is private. No one ever, ever gets to see draft zero. This is the draft that you write to tell yourself what the story is. Someone asked me recently how to guard against writing on auto-pilot. I responded that writing on auto-pilot is very, very important! I sit there and I bash the stuff out. I don’t edit – I let it flow. The important thing is that the next day I sit down and edit like crazy. But for the first month or so of writing a book I try to get the creative side of the mind to get it down there on the page.

Pratchett was an eager researcher. In his short essay ‘Thought Process,’ he describes a day of writing in which researching tortoises leads him to the death of ancient playwright Aeschylus, the philosophy of Zeno, the biology of birds, prayer wheels, and William Blake.

This process is apparent in much of Pratchett’s work – while his stories have their own momentum, they’re often built around a functioning knowledge of processes like banking or the postal service. This type of research – not just looking up what you want to know, but putting in the work to prompt ideas – is something Pratchett rightly championed.

I read anything that’s going to be interesting. But you don’t know what it is until you’ve read it. Somewhere in a book on the history of false teeth there’ll be the making of a novel.

– Terry Pratchett from Arminta Wallace’s ‘And the magic begins’

So, do you just dive in and hope you find something good? Not quite. Always gifted with metaphor, Pratchett explains that while you don’t know what topics are going to fire your imagination, you do know what you’re trying to create.

Read with the mind-set of a carpenter looking at trees.

The carpenter doesn’t gather up wood, take it home, then decide what to make; they have an idea of what they want to create, then they go looking for suitable materials. If you can apply this logic to your research, remaining open to inspiration without sacrificing purpose, you’ll have nailed a skill possessed by only the most consistently talented authors.

Of course, that’s not the only type of research that should go into your writing. Pratchett also offers the perennial advice to read, read, read what you want to write.

Gratifyingly, Pratchett doesn’t stop there, cautioning budding genre writers that while they need a deep understanding of what’s gone before, their aim shouldn’t be to just replicate it.

There is a term that readers have been known to apply to fantasy that is sometimes an unquestioning echo of better work gone before, with a static society, conveniently ugly “bad” races, magic that works like electricity, and horses that work like cars. It’s EFP, or Extruded Fantasy Product. It can be recognized by the fact that you can’t tell it apart from all the other EFP.

EFP is a real stumbling block for a lot of beginner fantasy authors. Happily, while Pratchett offers the diagnosis here, he was also a vocal advocate of the cure…

Terry Pratchett advises authors to regard books as a carpenter regards trees.CLICK TO TWEET

3. Find the reality in your fiction

Pratchett’s oeuvre is more varied than just his Discworld series, but these pseudo-pastiche fantasy books are the perfect example of his approach to writing unique, vibrant fiction.

Beginning with a comedic take on traditional high fantasy, Pratchett’s world evolved from book to book, with technological progress, political upheaval, and burgeoning civil rights movements asking practical questions about how a world peopled by trolls, dwarves, and werewolves would actually work.

Apply logic in places where it wasn’t intended to exist. If assured that the Queen of the Fairies has a necklace made of broken promises, ask yourself what it looks like. If there is magic, where does it come from? Why isn’t everyone using it? What rules will you have to give it to allow some tension in your story? How does society operate? Where does the food come from? You need to know how your world works.

This kind of whimsical practicality is a hallmark of Pratchett’s work, but it’s also a valuable way to approach world building, whatever the genre of your writing.

There’s no such thing as dragons, but readers still have a pretty good idea how they’d react if one appeared in front of them (and it’s not with a quip.)CLICK TO TWEET

In terms of depicting believable characters, Pratchett eschews the common advice to base your characters on real people. Reality is often stranger than fiction, and the complexities of real life can feel inauthentic when committed to paper. Instead of trying to recreate individuals, Pratchett recommends identifying personality types.

What I always say to people is that when it comes to inventing characters, don’t base a character on someone you know. But it may be a good idea to base the character on a type of character that you know, because lots of other people will know people like that.… A great deal of character work lies not in describing the characters, but in describing the shape that they leave in the world. How they react to other people. How they face things. When they keep silent. The manner in which they say things. Character does not consist of telling the reader what color a person’s eyes are and how tall he is. You do not need pages and pages of physical description to get a character. You can get nearly all the physical description you need by one thing that character says that makes people think, “Aha! I know exactly what kind of person would say something like that!”

Moving away from craft, Pratchett also offers up words of encouragement – not just to budding writers, but to anyone trying to accomplish a difficult task.

Pratchett is one of those authors who doesn’t believe in writer’s block, and his advice to those struggling to finish a project is mostly to sit back down and keep writing.

There are times in life when people must know when not to let go. Balloons are designed to teach small children this.

He’s right, too. The unfortunate truth is that authors can’t control how their work is received, but one thing you can guarantee is that, if you persevere in your writing, you can finish a project. If that’s an experience you’re yet to have, it’s one you owe it to yourself to chase down.

It is well known that a vital ingredient of success is not knowing that what you’re attempting can’t be done.

This final piece of advice isn’t quite from Pratchett himself, though it’s an idea he referenced on several occasions. Instead, Sir Terry is our example here – over a long career of writing, his prose, storytelling, and characterization went from strength to strength.

While Pratchett fans don’t agree on where his golden period starts, most discussions of his writing acknowledge that he started good and worked his way to great. Friend and collaborator Neil Gaiman echoes Pratchett’s own sentiments in his assessment of why this might be:

He’s got better and better over the years – he now follows the story, not the jokes, while I think the early books followed the jokes.

– Neil Gaiman in ‘A life in writing: Terry Pratchett’