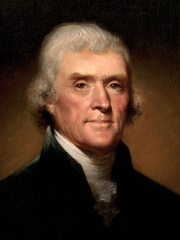 Thomas Jefferson (April 13, 1743 – July 4, 1826) was an American statesman, diplomat, lawyer, architect, philosopher, and Founding Father who served as the third president of the United States from 1801 to 1809.

Jefferson didn’t wake up at a set time every day. Instead, he wrote that, “Whether I retire to bed early or late, I rise with the sun.” Typically, he would get out of bed whenever there was enough light for him to read the clock next to his bed.

He once boasted that he hadn’t slept late in 50 years, according to Colonial Williamsburg’s official blog.

Before breakfast, the Founding Father would tend to his correspondence. Over the course of his life, he wrote somewhere around 20,000 letters.

Jefferson tended to dress simply. He liked to keep his pockets filled with all sorts of odds and ends including “… scales, drawing instruments, a thermometer, a surveying compass, a level, and even a globe,” along with a small ivory notebook and a pencil to record his observations and measurements.

Once, Jefferson’s casual style caused a bit of a political scandal. English diplomat Anthony Merry was bewildered when he called upon the president and found him still wearing his bedroom slippers.

Jefferson typically ate breakfast at 8:00 a.m. According to the blog Early to Rise and Colonial Williamsburg, the meal would likely include tea, hot wheat and corn bread, cold ham, butter, and “hoe cakes” — or cornmeal pancakes — and would be served in the dining room.

He is said to have had a preference for coffee, as well.

In his letters to his relatives and grandchildren, Jefferson advocated discipline and daily routines.

Throughout the day, Jefferson would adhere to one of his own routines — recording his observations. Throughout his life, he kept notes on temperature, wind speed and direction, meteorological oddities, the migration of birds, and the appearance of flowers.

Jefferson also would typically ride a horse across his 5,000 acre property.

Dinner, the largest meal of the day, would take place around 3 p.m. Jefferson preferred to dine with around 14 people, including family, visitors, and fellow politicians.

Toward the end of the day, the third US president would eat a smaller supper. This meal provided Jefferson — an “incessant conversationalist,” according to Colonial Williamsburg re-enactor Bill Barker — yet another opportunity to talk with his guests.

Despite writing the Declaration of Independence, Jefferson only freed a total of seven people over the course of his life and in his will. He also unofficially freed several of the children he had with Sally Hemings, an enslaved woman who was believed to be Jefferson’s late wife’s half sister.

Seventeen years after leaving office, and exactly fifty years to the day of the signing of the Declaration of Independence, Jefferson passed away at Monticello, on July 4, 1826. In addition to his legacy as a Founding Father, he also left us with his 10 Rules for a Good Life:

1. Never put off till tomorrow what you can do today.

2. Never trouble another for what you can do yourself.

3. Never spend your money before you have it.

4. Never buy what you do not want because it is cheap; it will never be dear to you.

5. Pride costs us more than hunger, thirst, and cold.

6. Never repent of having eaten too little.

7. Nothing is troublesome that we do willingly.

8. Don’t let the evils that have never happened cost you pain.