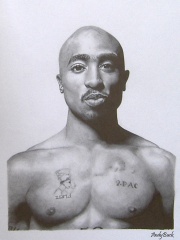 Tupac Amaru Shakur better known by his stage name 2Pac and by his alias Makaveli, was an American rapper, songwriter, and actor.

Between October 1995, when he was bailed out of prison by Suge Knight and signed to Death Row Records, until September 1996, when he was killed, ’Pac was in constant go mode. In that 11 months’ time, he completed two albums, including one double disc that contained a staggering 27 songs in All Eyez on Me, and a plethora of other tracks, some which still have not been released nearly 20 years later. He recorded over a dozen music videos and also completed three feature films—Bullet, Gridlock’d, and Gang Related—which were released following his death. Yet, he still had enough song material for six posthumous LPs.

“He was moving fast like a race every day,” said Cali rapper Bad Azz who recorded with the rap icon in the months leading up to his death and appeared on the Don Killuminati track “Krazy.” “Things it takes people a lifetime to do, he was doing them in two weeks.”

Pac’s laboriousness in the time leading up to his death especially stands out when compared to other rap legends who died before their times in the same era. Besides Biggie’s Life After Death LP, which was completed before he was killed, his team was only able to put together one additional patchwork project (Born Again) of unreleased material, which took the assistance of over 20 artists to complete.

Big Pun’s posthumous album Yeeeah Baby was also completed before his death in 2000. The Terror Squad member’s only other release was Endangered Species in 2001, which was partially filled with remixes of previously released tracks. Big L, who died at the age of 24 in 1999, possessed a deeper cache, having enough material for his brother Donald Phinazee to put together another three albums from the Harlem spitta.

Shakur was pumping out records on a whole other level. “He worked like a fucking racehorse,” said former Death Row lablemate Snoop Dogg in an interview with VladTV in 2013. The Long Beach rap legend remembered ’Pac’s studio sessions moving at a strangely rapid pace. “It’d be like 30 niggas in [the studio],” recalled Snoop. “[Tupac] would make a song. He’ll let him get on the song, him get on the song, him get on the song. As soon as the song go off, he won’t even listen to it. ‘Put that shit over there, pull the next beat up.’ He move on the next beat, they writing some more shit. They finish with that song, he say, ‘Ima do one by myself.’ Twenty minutes later and he in [the booth] spitting it. That’s three songs this nigga done did in an hour. He ain’t listen to nan one of them.”

Outlawz member Young Noble also remembers Shakur’s frantic work schedule. “We’d get up and go to the set [of the movies ’Pac was working on] at six, seven in the morning, and then go to the damn studio after that. We’d get to the studio at five or six, and not leave that bitch ’til three, four in the morning,” he told XXL in 2003.

’Pac’s insistence on trying to make so many records in such a short amount of time always stuck in Snoop’s mind. “To me it was like, why is he working so fast and so hard and trying to finish these records up? He had to know [he would die soon].”

Tupac clearly felt like death was around the corner. Whether it was something he manifested into his own mind from his music, or something he had some supernatural awareness of. The evidence is littered in his music. The last three albums he recorded, two of which happened during this whirlwind output of songs, are steeped in thoughts of his mortality. There are too many examples for one article. The “I Ain’t Mad at Cha” video, which depicts him getting shot and going to heaven, was recorded just weeks before his death. Did he clearly know his time was coming up soon and made sure to spend every waking moment trying to finish out his legacy? Questions only lead to more questions.

Shakur’s apparent mind state in his last months on earth are analogous of an exchange between characters in the 1994 film Above the Rim, which 2Pac co-starred in. During the climax, an outdoor basketball tournament game where the bad guys are going all out, the character Shep played by Leon is knocked to the ground for the umpteenth time by the opposing team. The movie’s protagonist, Kyle (Duane Martin), assists him off the pavement and asks sympathetically, “Why are you doing this, man? It’s just a game.” Bloodied, out of breath, and seemingly with the world on his shoulders at that moment, Shep responds, “Not to me.”

Rap was never a game to 2Pac. Yet, he went at it from the perspective of a player who knew his final shot was looming. He went hard in the paint until the very end. At the end of the day, the rap game is better for it.

“You smile because he did everything he said he was going to do,” said ’Pac’s step-brother Moprome Shakur in an interview earlier this year. “It’s just a shame we lost him so early.”