‘I’ve always thought that skinny was the goal, but with this job, I also have to be strong.’ 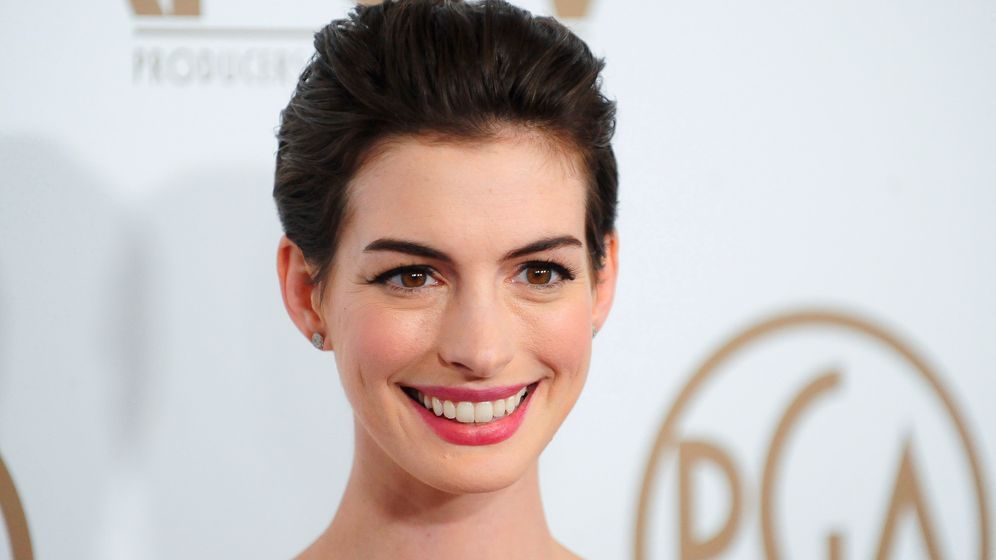 While preparing for her role as Catwoman, Hathaway followed an almost vegan, anti-inflammatory diet, which includes whole grains to control blood sugar, avocados, almonds (she doesn’t like walnuts), sesame seeds, dark chocolate, bright red and orange vegetables that are high in antioxidants (Hathaway loves yams), dark leafy greens, ginger, and turmeric. Keeping her protein levels up to build muscle during intense training sessions was the main challenge Hathaway faced, so Keller worked a lot of Seitan and tempeh into the meal plan.

Now that sounds MUCH more sustainable.

And some more great info Shape gives us is:

Some of the actress’s favorite meals while preparing for the film include miso soup, a tempeh club avocado sandwich on gluten-free bread, Tuscan brown rice salad, vegetarian chicken fried steak made with seitan, egg white frittatas, and vegetarian egg rolls. It all sounds super healthy but Keller admits Hathaway is a chocolate person and loved her gluten-free chocolate chip cookies, fudge brownies, and marble cake. While working on Dark Knight Rises, Keller made sure the actress had a dessert every day so she wouldn’t have any cravings. Other sweet fixes Hathaway enjoyed include chocolate power smoothies made with almond milk, and Keller’s Mighty Bars, which she shipped overseas during filming.

The actress used to be vegan, but when she was filming “Interstellar” and spending multiple days in a 40-pound suit, she gave up veganism.

“I just didn’t feel good or healthy … not strong,” she told Harper’s Bazaar in 2014.  She said she ate a piece of fish and the next day she felt better.

Hathaway on Training for Catwoman

‘It wasn’t about being in perfect shape. It was about being able to do the fighting and the stunts perfectly.’

Hathaway on Starting Out With Exercise

‘There’s a workout hump where you’re so weak that you hate everything, and everything’s painful.’

‘I’ve always thought that skinny was the goal, but with this job, I also have to be strong.’

‘Yeah, I work out with 5-lb. weights, but I pushed a baby out of my body, so I feel good right now.’

Hathaway on Her Post-baby Body

I don’t care what I look like. I feel great.’

Hathaway on Being Perfect

‘I gave up my struggle with perfection a long time ago.’

‘When do I feel my best? When I haven’t looked at a mirror for days, and I’m doing things that make me happy.’

‘I think relationships are work, but love is a gift.’

Hathaway on the Clarity Cleanse

‘I’m just sharing something that has helped me and brought more light into my life.’

Hathaway on Winning an Oscar

‘Believe me, at that point, I would’ve been happy to see any of them up there giving a speech instead of me.’

In April 2019, actress Anne Hathaway revealed to Tatler magazine that she plans to quit drinking until her son is 18. Hathaway’s son with husband Adam Shulman was born in 2016, which means her next drink won’t be until 2035.

Hathaway shared that she had multiple reasons to quit drinking. She explains she does not drink in moderation. She has gone to parties she doesn’t remember and attended meetings in which she was not herself. Binge drinking is a problem for her that has resulted in impairing hangovers.

Regular binge drinking can be a dangerous cycle. People in the public eye, like Hathaway, who make a lifestyle change to address unhealthy behavior can set a great example for others to examine their own habits. It’s also an opportunity to revisit our cultural understanding of the negative effects of excessive alcohol consumption.

“I had to make a choice and I chose mornings. Isn’t that annoying? Isn’t that horrible? I’m really irritated by how well it’s going.”

The 36-year-old added that she plans to take up drinking again once her son goes off to college: “[I’m going to] move to a vineyard and spend the back half of my life completely sloshed, happy, sun-drenched. That’s the plan!