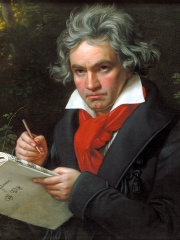 Ludwig van Beethoven (17 December 1770 – 26 March 1827) was a German composer and pianist whose music ranks amongst the most performed of the classical music repertoire; he remains one of the most admired composers in the history of Western music.

He followed a series of rigorous habits throughout his life, which provided the fertile ground that his creative mind needed to flourish.

In a letter to a young fan, Beethoven once stated:

“Do not only practice art, but get at the very heart of it; this it deserves, for only art and science raise men to the God-head.”

In other words, he was not someone who simply played the notes he was given or who practiced absentmindedly. Here, we see that Beethoven was a believer in what we know today as  “deliberate practice”.

In the same letter, he goes on to say:

“The true artist is not proud, he unfortunately sees that art has no limits; he feels darkly how far he is from the goal; and though he may be admired by others, he is sad not to have reached that point to which his better genius only appears as a distant, guiding sun.”

No, Beethoven was not content with being thought a musical genius, with resting on his laurels as the best pianist in Vienna – if not all of Europe. He sought to push music and art further, to surpass its perceived limits and in doing so come closer to the divine.

With that in mind, let’s take a closer look at some of these specific habits.

Each morning, despite having a cook, Beethoven would brew his own coffee. And to make sure each cup of joe had precisely the right amount of caffeine, he’d count out the beans, one by one, until he hit exactly 60.

Beethoven’s diet in general was fairly formulaic, usually eating the same foods and often going to the same cafes, restaurants, and taverns.

Walks in Nature for Inspiration

Beethoven typically woke up around dawn and worked until 2 or 3 in the afternoon. But he did take breaks during this stretch. And these breaks usually came in the form of long walks through nature. He was a big fan of the outdoors, to put it lightly.

These breaks gave him a moment away from his work, yet they also fueled his work and provided him with new ideas and perspectives. Perhaps that’s why these kinds of walks have been such a go-to for other great minds, from fellow composers, like Gustav Mahler, to philosophers, like Immanuel Kant.

And of course, walking doesn’t just give mental benefits – it’s good exercise, too.

Writing Down Notes on Thoughts and Ideas

He carried paper and pencil, which allowed him to write and take notes on every thought that came to him, even when he wasn’t at his desk.

In fact, Beethoven was a prolific writer and documenter in general. The reason we know so much about his life are the copious amounts of records he left behind in the form of his extensive, detailed journal entries, numerous letters, brimming sketchbooks, conversation books, and notes.