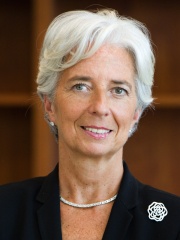 Lagarde is a self-described morning person. She wakes up after getting “six to six and a half” hours of sleep,” as told to Bloomberg, and the first step of her morning routine is “green tea, buckets of it.”

As one of the most powerful women in the world (Forbes ranked her second, after German Chancellor Angela Merkel), Lagarde is a self-described morning person. She wakes up after getting “six to six and a half” hours of sleep,” as told to Bloomberg, and the first step of her morning routine is “green tea, buckets of it.”

Success is never complete. It’s an endless combat. Each morning one must put one’s capacities to the test once again.

IS THIS THE WORLD’S SEXIEST WOMAN (AND THE MOST POWERFUL)? | THE GUARDIAN

For Lagarde, who believes keeping physically fit plays a crucial role in success, looking after herself is a top priority in her daily routine. “As a former athlete, the development of the brain, heart, soul and body are essential on your journey,” she said during a talk at Zayed University in Dubai. “It is a combination that comes together. Be driven by yourself and look after yourself and your spirituality, I still do yoga!”

She told The Guardian in a 2011 profile that “she goes to the gym every day, cycles 20 to 30km once a week and swims as often as she can.” The Washington Post revealed that a staple in her travel routine is to swim laps, wherever she is in the world. She also doesn’t smoke, eat red meat, or drink, although she told Vogue, “I did have one glass of champagne at the airport after my IMF grilling.”

As a divorced mother of two boys, Lagarde has often spoken about the challenges of balancing a high pressure career with parenthood. She admitted in a lunch interview with The Financial Times that the longest break she’s ever had was “three weeks when I had my first son.”

“The balancing act is very hard. I had to accept that I could not be successful at everything. You draw up priorities, and you accept a lot of guilt,” she told The Guardian. “It’s part of growing up – as a woman, a spouse, a mother. You can not let guilt engineer your life.

In my career, the best support in the end was my kids. When I was about to become chairman of Baker & McKenzie, and I knew the amount of work it would involve, the younger one took me aside and said: “Mum, do it. You started it, you have to finish it.”

SLEEVES UP, READY TO WORK | THE GUARDIAN

Lagarde has also spoken the stress and dangers of burnout that women face in the workplace. She spoke to Arianna Huffington in 2015 on HuffPost Live about the workplace and home pressures that often lead to burn out in females.

“I think that one of the reasons why it’s more stressful for women and the burnout rate is higher – and at all levels – is, in my view, largely caused by the fact that women who are on the job market have at least two jobs,” Lagarde said.

“They have another one at home. And that job at home, which is not accounted for in national GDP, is one that they often shoulder by themselves. To at least alleviate the burnout factor, having a companion who actually understands those issues, who participates, who helps out at home, is, in my view, a great support.”