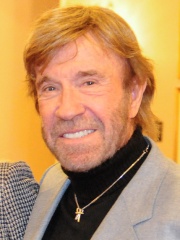 Norris describes his workout routine on the website creators.com:

—Total Gym: I do a routine that takes me exactly 15 minutes.

—Fast walk: Then we will fast-walk two miles or use one of our elliptical machines for 30 minutes.

—Crunches: I will do 10 minutes of crunches for my abs.

—Stretching: I will finish with a few minutes of stretching.

—Martial arts: I start by stretching and then move on to isolated kicks in slow motion. Then I will do hand and feet combination strikes on a heavy bag. If I have someone besides Gena to work out with, I will practice my jujitsu. She doesn’t like my getting her into chokeholds or arm bars!

—Pool exercise: We finish by doing kicks in the pool. Why do I use the pool? It has numerous benefits. Low-impact water workouts combine cardiovascular exercises with strength training, with little risk of injury. Even though you might feel lighter, the added resistance of water makes the aerobics challenging. Water provides 12 times the resistance of air because of its higher density. As water pushes against the body, the movements become more difficult, requiring muscles to work harder. I strongly recommend it.

Here are 10 general tips from Norris:

Chuck Norris wasn’t always the image of health and fitness, in fact, he grew up un-athletic and shy. “Because I didn’t have a father image, I grew up very shy and introverted,” he told a crowd of 2,400 people during the McLane Lecture April 2016 at the University of Mary Hardin-Baylor in Belton, Texas. “I was too shy to participate in sports, so I grew up non-athletic and very timid.”

After graduation from high school, Norris joined the U.S. Air Force. During his station in Korea, he had his first exposure to the martial arts. Norris enrolled in a Judo class, but while exploring the village one day, something caught his eye.

“I saw these guys doing these incredible kicks in the air. I didn’t think the human body could do something like that,” Norris said. “I wanted to find out what it was, but they looked mean, so I didn’t go down and talk to them.” When he went back to camp and was informed it was Taekwondo, a passion was ignited within him. “I was so determined to learn this art, that I finally made my black belt in it,” he said.

Talk about starting from the bottom, Chuck Norris didn’t actually grow up rich. Stemming from his background, he believes that being fit and healthy can be very simple! You can do a variety activities that require very little or no money. He also recommends purchasing old workout DVDs and equipment because they’re very cheap and totally worth the buy. He is also an advocate of walking as a simple form of exercise.

We all think of Chuck Norris as this invincible perfect human being. But before Chuck became such a sensation in the fitness world, he actually failed in martial arts. When he first opened a martial arts school in LA with $600 borrowed from his father, he and three of his students traveled to Salt Lake City, Utah to compete. “My three students won, and I lost,” Norris remembers. “As we were driving back, I thought about how I’d lost, and I said, ‘I may lose again, but I’ll never lose the same way twice.’” After that, however, he went on to become a 6-time world champion. Just goes to show sometimes in order to succeed, we must learn from failures first.

He believes in eating for disease prevention as well as weight maintenance. Norris prefers to eat whole, organic foods to keep his body properly fueled for his martial arts workouts. He also uses healthier substitutions daily- instead of sugar, he uses stevia, which is a natural plant derived sweetener. While Chuck Norris enjoys popcorn when he watches a movie, he makes sure that it’s the non-buttered kind. He even penned an article here where he describes the diet he followed to beat his skin cancer

Chuck Norris is a huge advocate for sunscreen/sun tan lotion due to a surprising skin cancer he once had. Sunscreen is essential for protecting your skin from the sun’s harmful UV rays, which can potentially cause cancer. He does however, advise you chose a sunscreen free of oxybenzone.

Chuck’s signature technique uses grappling, striking, kicking to incorporate a full martial arts practice. It also comes with key guidelines to live by. There are a variety of benefits from this form of exercising that enhances: fitness, mood, confidence, self-esteem, coordination,energy, attitude, and plenty more.

Chuck Norris started his non-profit organization Kickstart Kids Program in 1990 and has been empowering children through karate ever since. Since it’s inception, over 85,000 alumni have graduated from the program. Following Chuck’s lead, find a cause you’re passionate about, and make a difference, it truly is rewarding!

According to Dr. Gullo, Chuck Norris prefers to eat his evening meal around (5:30) to let his food digest before bedtime. His final meal of the day is often a combination of a lean protein such as fish or chicken, green vegetables, and a complex carbohydrate, such as brown rice.

Norris advocates for teens to sleep 10 hours a night a says adults should aim for 7-9 hours to improve memory, learning, and mental. He said he personally aims for 9, because that’s what works for him. And if it works for Chuck Norris, it will probably be good for you too!

Chuck Norris, a devout Christian, admits to losing his way during his Hollywood career and drinking too much alcohol and being angry during a time. Since then, however, he has returned to his Christian roots and is an advocate for his spiritual beliefs. In an article he wrote for WND, he cites a 30 year research study done by the Human Population Laboratory that “proved for the first time that churches, synagogues, mosques or Buddhist monasteries helped create good health behavior, rather than simply attracting people who already took better care of themselves.”