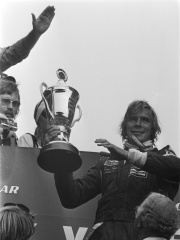 The 1976 world champion and a notorious playboy. He seemed to enjoy the lifestyle of an F1 driver as much as he did actually driving an F1 car.

With all the time he spent partying, there was not necessarily a ton of time left for training. A team principal at the time noted that Hunt’s preparations seemed to include nothing more than, “champagne and Marlboros and shagging,” according to the Guardian‘s Tim Adams.

Unfortunately, Hunt’s lifestyle eventually caught up with him and he died of a heart attack at the age of just 45.

12 September 1985, James and Sarah became the parents of their first son. In November 1989, James and Sarah divorced. It was a very difficult time for both, the divorce procedure pushed James to the bottom. Mike Dennett, his close friend, occasionally suffered from bouts of depression too, he was the only one whom James would admit to himself at this time.

“He was trying to get rid of depression for many years, and therefore brought the budgies. He thought they can to distract him, and soon turned from a hobby into an obsession. He sat for hours in the aviary, but returned still sulking, and was so self-involved that it was impossible to even talk.” (Mike Dennett)

However, James was a fighter. He didn’t wait until something happens, he decided it was time to do something. He treated himself as a doctor, cutting off one after the other from his vices to find out where is the problem. He stopped drinking, smoking cigarettes and marijuana, take drugs.

“He tried a variety of methods – acupuncture, Chinese medicine, and have studied all the possible theories. Went to different specialists – psychologists, psychotherapists, psychiatrists, psychoanalysts and other to understand the causes of his depression. And in the end he overcame it”. (Mike Dennett)

James began again to exercise, comply with a healthy diet, becoming more focused on his job. New James was loved by all of his colleagues from the world of journalism, even those who had treated him with hostility. Probably the decision of James to be a better person than he was, was influenced on the fact that in 1989 he met the woman who eventually became the love of his life.